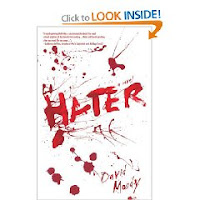 DO NOT PANIC
REMAIN CALM
TAKE SHELTER
WAIT FOR FURTHER INSTRUCTIONS
THE SITUATION IS UNDER CONTROL
One Thursday morning, Danny McCoyne witnesses a horrific attack...a man suddenly goes crazy in the street and murders an elderly woman by stabbing her in the gut with an umbrella.  He considers it a terrible act by an obvious lunatic, but doesn't think much of it beyond that.  Until such unsolicited attacks begin to happen again and again and again in a steadily widening arc around the city.  No one comes to help and the police and military are just as susceptible to the menace as regular citizens.  TV broadcasts dwindle and then cease, showing only a black screen with the message: Do not panic. Remain calm. Take shelter.  Wait for further instructions.  The situation is under control.
This doesn't feel under control...as Danny and his family become fugitives in their own home, he wonders how long it will take for the Haters (the term given by the media to the maniacal killers) to reach his home.  The answer will take Danny beyond all limits he has ever known or could possibly imagine.
I found Hater reviewed briefly in a copy of Advance Magazine, one of the review journals my library uses for collection development.  The first sentence had me, "Optioned by Guillermo del Toro"  Anyone who has read this blog for long or knows me even a little knows the celebrity crush I have for this man's films.  I own all that I can get my grubby little hands on and am always eager for the next.  I love dystopian fiction just as I love a good disaster movie.  I have no idea why, I just do.  I love books that explore definitions of humanity and just what the boundaries of good v. evil may be.  This book takes a bleak, bloody, dark, brutal, unsentimental, and vicious look into the abyss and that abyss is staring hard right back.  It did steal quite a bit of Holocaust thunder there towards the end, but the author's point was well made so I won't give him too much of a hard time for spreading some of those emotions around.  Nice twists and contortions of good guys and bad guys.  Which is which?  It gets kind of hard to tell at the end of the book and I respect that.
This book is a hodge-podge of 28 Days Later, Invasion of the Body Snatchers, X-Men, The Road, and I Am Legend.  I can hardly wait for the second in the trilogy, Dog Blood, which is currently scheduled for release next year.  Check out David Moody's website!
Posted by Holley T at 10:10 PM

I am ALL OVER THIS!

I bought it so I'll bring it by on Sunday!

Wow...this does sound like a great book to read!