tales of passion, tales of woo

not really, but someone from another library once called the reference desk looking for that book for one of their own patrons and the actual title is "Tales of Passion, Tales of Woe." It makes me smile to think of it AND it sort of reminds me of the card throwing at Rocky Horror. It's an ADD moment to be sure.
Anyway, I hope everyone had a fantastic Thanksgiving. If you don't celebrate the holiday, I hope you had a fabulous Thursday :-)
I was at KT's house from Wednesday to Friday and had a blast. Cookies, games, Christmas decorations, frivolity, and controlled chaos were the order of the days and I've rarely had such a rollickin' good time! I fell off the portioning wagon fairly badly but mananged to eek out a .2 pound loss for the week of Thanksgiving. And you know what? I'll take it.
I'm still REALLY loving my new used car and just zip in and out of traffic like a little bumblebee. I don't know if I'll ever want something other than such a small car. They are very zippy and fun.
So far, I've failed at my endeavors to blog more, but I did delete a few of the more obsurdly time consuming things in which I participated on Facebook in an attempt to free up more time for other things. I've frequently found myself coming in from work and getting straight on the computer for the rest of the night and not doing anything really other than staring at Facebook and hitting the refresh button. Not good. I have too many books to read and a monthly subscription to Netflix to be spending all of my time playing games and hoping my "friends" will talk to me. I'm also going to harshly weed the feeds in my Google Reader. I just have too many and the thoughts of logging on are too much to bear. I miss checking in with the sites and blogs that I really enjoyed before I got all bogged down in too much info. It's time for a fresh start!
I hope I haven't lost everyone with my blogging laziness. Are you all still there?
Posted by Holley T at 10:45 AM 3 comments:

Mr. Johnson moved on to something more lucrative after Miami Vice... 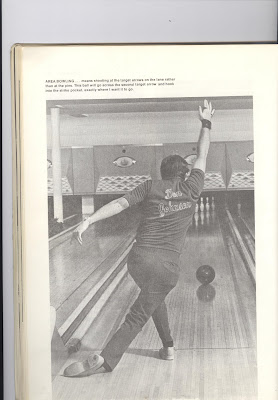 Inside Bowling by Don Johnson and Jack Patterson
Posted by Holley T at 10:38 AM No comments:

I'm still racking up on my reading! I managed to get in 13 books last month and am going strong here mid-November. I'm feeling REAL strong on my goal of reading 150 books for the year!

What is Man? by Mark Twain
Controversial and, dare I say, irreverent essay on the humanity of humans in the form of a Socratic dialogue between an Old Man and a Young Man. The OM takes the position of human as machine, working as programmed and motivated only by his own contentment of spirit. The YM, as young men tend to do, takes what he considers to be the high road. Great companion read to Bernard Beckett's Genesis, coming up a little later on this list.

Lirael: Daughter of the Clayr by Garth Nix
This is the middle book in Nix's young adult fantasy Abhorsen trilogy. Magic, necromancy, adventure, danger, loyalty, and bravery - something for all and I loved the whole series!
Winter Kissed by Michele Hauf and Vivi Anna
Two winter-themed tales of romance from Harlequin. Okay, but not great. LOTS of awkward dialogue.
Genesis by Bernard Beckett
One of my favorite books. It was published as a young adult novel in the author's native New Zealand and it gets catalogued both ways around the country. A young girl, Anaxamander, is presenting her historical research on Adam Ford in an attempt to get into The Academy. Adam's life was a pivotal moment for a society that had already been devastated by a world-wide plague and suffering extreme isolation for many, many years. Anax's historical research uncovers so much more than she intended or is ready for. A++
Abhorsen by Garth Nix
The concluding volume in Nix's Abhorsen trilogy. This is a great series to pick up for Potter fans!
The Red Tree by Caitlin Kiernan
A mind-bending, reality-shredding tale of dread from an author Neil Gaiman describes as "the poet and the bard of the wasted and the lost." Author Sarah Crowe is attempting to get away from her grief over the death of her lover, Amanda, but burying herself in work in an isolated New England farmhouse. Her discovery of an unfinished manuscript on the evil history of an old tree on the property doesn't help her situation much. VERY, VERY good. One of the very best works of cold, dead-weight dread I've read in recent memory.
The Curse Workers: The White Cat by Holly Black
A first novel in a new young adult series from Black, set in a universe where curse workers have been officially outlawed, but are so common that everyone is required to wear gloves so that no skin-to-skin contact, and thus no curses, can be transmitted. Of course, some people cheat, and that is what currently has Cassel in so much trouble. The audio is narrated by Jesse Eisenberg and he does a great job!
Shade by Jeri Smith-Ready
Everyone born Post-Shift has the ability to see ghosts. Aura has capitalized on that by working in her aunt's law firm seeking justice for the wrongly killed. She takes some pride in her work but it's a pain in the ass overall. That is, until her boyfriend, on what should have been the best night of his life, accidentally dies instead. Now she's caught between the ghost of the boy she loved (who still considers them to be a couple) and the possibility of new love with Zachary. This is a young adult novel, but I would only recommend with confidence to high school age and up for language, sex, and drugs.
Private Pleasures by Bertrice Small
Are you familiar with Bertrice Small? If so, 'nuf said. If not, let's just say I was more than ready to get off the YA train and in to something a whole helluva lot *bit* more grown up. In plain language, this is erotica so if that is not your bailiwick, beware! I wish WE had The Channel.
Skinny Dip by Carl Hiaasen
We've booked this author to speak at our library next year so the whole department is reading his books so we can start the handselling. Chaz pushes his wife overboard while on a cruise celebrating their anniversary. He was concerned that she'd found out about his shady dealings on the job and thought this would be a convenient way to shut her up. Unfortunately for him, Joey's years as a champion diver in college hold her in good stead and she's ready for revenge. Fast moving story with lots of funny characters and humor, some of it very sexual in nature, but the author's CONSTANT use of every character's full name, first and last, was SO F*&^%ing ANNOYING!!!!!!!!!!!!!! Sometimes more than once in the same sentence. I want to read some of his other books but can't make myself do it as that was SO offputting.
Who Fears Death by Nnedi Okarafor
*sigh* I sooooo wanted to love this but it just didn't happen. It got lots of good press but it just didn't resonate with me. It most reminded me of Alice Walker's Possessing the Secret of Joy. I am newly horrified by rape and female circumcision, in detail. Lots of sperm and other bodily fluids tossed willy nilly. I could see the point the author was trying to make, or shine light upon, but it took away from the central story for me. However, I think I will remember Onyesonwu until the day I die. A job well done, I'd say.
Poems Bewitched and Haunted edited by John Hollander
The main thing I learned was that there are billions and billions of poems out there on how evil/witchy/demonic women are. Poems suitable for a Halloween collection about evil/warlocky/demonic men are apparently pretty thin on the ground. *sigh*
Mates, Dates, and Inflatable Bras by Cathy Hopkins
A long running, VERY British young adult series so it's "mates" as in friends rather than any other definition. Short, funny, and highly entertaining! Lucy is an outsider in her family and feels like everyone knows what they want to do with their lives, already, at the ripe old age of 14...except her. A new girl horns in on her BFF and the hottest boy in town turns out to be SO VERY unattainable. I really liked it and am reading the second one now. There are a lot of books in this series so I hope they stay fun!
What are YOU reading?
Posted by Holley T at 4:30 PM No comments:

In honor of the fact that I am on staycation this week AND that I am indeed putting up my Christmas tree today, I present to the world my elf self! It is so much trouble getting out all these decorations that I want to look at them for way more than two or three weeks! I have lots of trips and pics to post about, but I've got to get the tree up since KT and the rest of my fav fam of five are coming over for dinner and decoratin'. Enjoy!