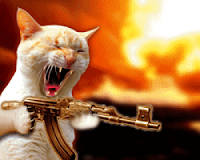 and I am at work, bored as hell. It is absolutely useless that we are open. There are probably 10 people in here at most. I've done nothing but listen to the HVAC run for 4 hours now.

(The one bit of business? Our resident crazyass phoner-inner called and wanted to know the meaning and history of the phrase "good luck"...KT, I'll give you 1 guess and the first one doesn't count)

We really have to come up with a great nick name for her...so far I can't think of anything crazy enough. She told Mary that someone from the Middle East owned the Federal Reserve, asked Mary to corroborate this dicey info, then refused to accept Mary's quite correct answer since it did not include her crazyass information. She asked me the meaning and history of the word "renig", especially "nig" (her emphasis, not mine). She informed me that it wouldn't be hard to find and that it was ancient Greek. Um, not that I found but whatevah. I can't even recall more of our conversation now because she is straight nut crazy. She asked Lauren what love was, what it did to the brain, and how to recognize and avoid it. (I'm hoping she's avoiding it just fine.) I don't know what to tell you about that either. She asked Daxx how to recognize and what to do about passive-aggressive behavior. (I was hoping this was a cry for help, ya know?) She asked someone to diagnose a mental disorder, but I don't remember which one of us it was. As in, "go get the DSM-IV and tell me what these symptoms mean!" (Just a suggestion, it means you should look in to electroshock therapy and quit calling us)

Curiously, the homicidal cat depicts exactly my own state of mind as I worked the day after Christmas, except we had the opposite flow problem: EVERYTHING had vomiting and/or diarrhea, and everyone was stupid and/or had very little money. Good times.

Well did KT tell you how I was eternally confused as to what "PRI 12" meant (which is what pops up when she calls)? Private line. (obvi duh, Lauren.) Anyway... I helped her diagnose symptoms for sleep disorders!