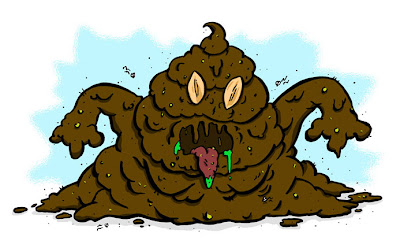 ...otherwise, and from here on out, to be known as The Mad Crapper.
So, Daxx the Magnificent storms into the workroom. Two teenage boys, in two separate stalls, both managed to deposit a huge, noxious dump above the waterline....effectively sealing off the men's room for all other use.
Noises and giggling were reported from that area, Daxx and Jorge and were dispatched for reconnaissance, and the discovery was made. Unfortunately, the boys had vacated the bathroom by that time, as anyone with an olfactory system would do, so we had no physical proof of the crime without some sort of crime lab testing.
Anger. Anger.
Daxx flushed both toilets multiple times without success. KT draped the offending matter with a bunch of toilet paper so that water and suction could work its magic, but it splashed up on to the toilet seat. The poor cleaning crew will have to deal with the rest of it after the library closes.
How coincidental that this occurs so soon after the last grotesquery...
Posted by Holley T at 5:16 PM

WHY are people so DISGUSTING???

I have no idea. I was under the general impression that toilet training, the basics of it at least, had been achieved by junior high. Obviously not...

Definitely not. I am laughing so so hard at all this, only because I'm not there to be stressing about it. Although if I were there, I'd probably be laughing too. Oh my. Welcome to Halloween season! Let the crazies begin!