My 30th birthday is now 2 weeks old and I can honestly say that I am still excited about being 30, no longer associated with those dastardly 20-somethings (no offense intended to all MY 20 and younger peeps out there!) who give being 20-something a bad name!

I had dinner with my dad and stepmom and my brother D and his family last weekend (Hi K, S, and C!) to celebrate. D and fam had been out of town for the previous couple of weeks so we just moved the celebration back a bit. After dinner, we went to Tannehill State Park where the ‘rents were camping. We roasted marshmallows; S told me a great story complete with weasels, bunnifoxes, a pasta-loving cow named Boudica, a frog (Freeda? I know it started with an ‘f’), and an evil lord…but don’t worry, he got his comeuppance. S promises to finish the story in a series of emails so I’m looking forward to it. 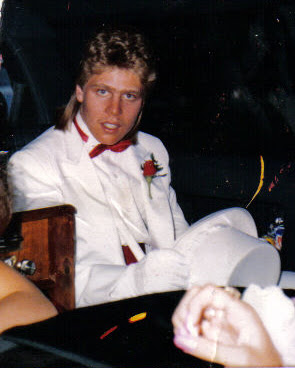 In honor of my 30th Birthday, I’m posting a photo of my brother Eddie. He was killed in 1989 in a drunk-driving accident when I was 12 and he only 20. So I figure I’ve turned 30 for him, even though in my mind’s eye he is always 9 years older than me.

This photo is from his high school prom. I always love this little snapshot of the mid 80’s with the quaffed hair and white tux. I was young enough and it was nearly twenty years ago so this and the few photos I have are really the only way I can remember what he looks like. We did not get along and never hung out or talked to one another much so I have only a few memories of any significance:

Eddie raced BMX bicycles, loved Van Halen, his girlfriend was named Stacy, he was an aluminum welder primarily (but welded anything when the occasion called for it), and was a great artist although he was almost completely color blind. I’ll take a picture of “The Lady” (which hangs in my living room) and put it here later. Due to the color blindness, I remember he preferred to work with charcoal so he wouldn’t have to worry about making anything the wrong color.

My maternal grandfather was also colorblind. The way I understand, it skips generations and is carried on the maternal side so if I [lost my mind and had children] had a grandson then he would run a good chance of being colorblind also. Scary, huh?