Okay, I'm feeling a little bit better today :)
Ironically, it was the computer class I taught this morning that did the trick. I have a really great group in Mr's K and H and Mrs. M. They're enthusiastic, participatory, and eager to adapt. That makes them a pleasure to teach :)
Anyway, on the B-day madness. I had been looking for this picture ever since the B-day dinner with my family a couple of weeks ago. I don't know about everyone else, but I really have a bad habit of putting things in a safe place...a real safe place...safe from even me :) But the B-day humor/madness first:
Scatological Humor

This particular brand of humor is a staple if you are to make it among the Wesley’s. Just about any sound that can be made by air issuing from the human body, and that is usually considered disgusting, we (okay, most of us) find hilarious. Case in point, my b’day cards from my niece and nephew, S and C. In avoidance of copyright infringement, I’ll annotate instead of scanning.

C’s choice (American Greetings if you’d like to rush out and get one for yourself) features a dog contemplating a discarded wad of chewing gum with not a little avarice. The dog happily snaps up that tempting, bacteria-laden morsel and subsequently suffers some intestinal distress. Open the card and through some trick of engineering genius, a large, pink bubble issues from the dog’s hind quarters. Don’t feel sorry for the dog…he’s grinning like a Cheshire cat :) On a related note, we had a dog named Bob (who’s still kickin around I might add, she must be 12 or 13 if she’s a day) who’s eyes were bigger than her stomach….WAY bigger. No one told her that disposable was not the same as edible...she ate a disposable diaper. “Why didn’t you stop her?” you may ask? We didn’t catch it on the way in, if you catch my drift. She had to have some assistance on the exiting end and Dad, in all his weak-stomached glory, drew the short straw. In the weak and straining interests of decorum and good manners, you imagine the rest :)
S’s selection, poet that she is, featured a lovely female skunk on the front cover and contained a poem about farts (another American Greetings winner, I’d love to meet their writers). I obviously can’t recreate the whole thing here, but this is my favorite stanza:
“A fart can occur in a number of places, And leave everyone with strange looks on their faces.” I told my brother D that stanza was definitely in honor of him since the “drop and run” is his favorite sport. S also included a lovely drawing which I’ve included below. She’s on a Redwall kick right now!

P.S. For those AR people out there, we named the dog Bob because she was born with a bobbed tail. And she did not look like a Bobbie, so Bob it was. She makes a very feminine Bob too! 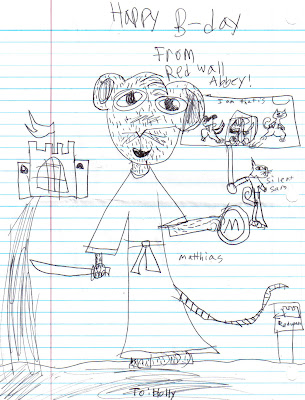