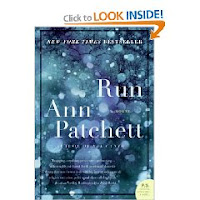 Bernadette and her husband wanted a houseful of children but when that didn't happen, they adopted.  The two boys, Tip and Teddy, were perfect for them in every way.  If the neighbors were startled by a white couple adopting two black children, no one really said anything.  When Bernadette dies, Doyle does his best to raise their three children as Bernadette would have wanted but something gets lost in the shuffle.  Their natural child (is that the word for it) kind of gets lost in the shuffle as Doyle focuses on raising two little politicians just like him.  What he gets are a scientist and a shy young man interested in joining the Catholic clergy.  After dragging the two young men to yet another political rally, Tip decides to put his foot down about attending any more.  During their arguement, Tip edges backward away from his father and unknowingly steps into the street, not seeing the oncoming headlights.  Tip is pushed out of the way by an unknown savior but her identity soon comes to light, changing Doyle's and his sons' lives forever.
I liked Run much better than I did Bel Canto, but it wasn't a terribly exciting novel.  There were no heartbreaking lows (despite the serious subject matter) and no soul-lifting highs (despite the relatively satisfying ending).  It was alot like digitally remastered music...you are left with pretty good music but all the high and low points have sort of been shaved off.  There was no character to hate and I didn't love any of them either.  Have I come to expect too much drama from my books, maybe?  Who knows?
Posted by Holley T at 1:01 PM