What I Did for Love by Susan Elizabeth Phillips 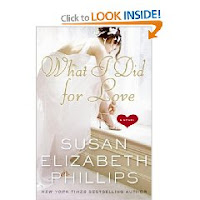 Many people have brushed What I Did for Love off as a rip-off of the Jennifer Anniston-Brangelina affair and the similarities are hard to ignore.  This did not hinder my enjoyment of the story.
Georgie York is having a bad day.  She has just found out, from a ravenous crowd of paparazzi, that her ex-husband and his new super-humanitarian wife, with whom he was having an affair before he left Georgie, are expecting their first child.  Georgie's former co-star in a much beloved comedy series, Bram Shephard, witnesses the fierce paparazzi attack and does nothing to help her.  A series of other humiliating events leads Georgie to plan a Vegas party trip with her best friend.  Her best friend unintentially stands her up for the trip and she, far too conveniently, runs into Bram.  He convinces her to go out and party with him, they get drunk and then these two staunch enemies wake up married.  Think about the Ashton Kutcher/Cameron Diaz movie What Happens In Vegas.  Georgie talks Bram into going along with the marriage for a while in hopes that the paparazzi will leave her alone if they think she's moved on.
Okay, this book got back to the SEP that I love!  WIDFL was still not up to some of her earlier books, especially the Bonner brothers, but I laughed out loud many a time and I loved these characters.  Georgie and Bram's sparring matches were right up there with any work she's done AND I read it in one sitting because I couldn't bear to put it down.  Phillips brought in characters from some of her other books and I thoroughly enjoyed visiting with them again, however briefly.  Some of the plot points are terribly transparent and some not as fully fleshed out as I would have liked, but over all I think SEP is getting back on track with this.
Posted by Holley T at 5:50 PM

I have this in my tbr pile.

It's definitely worth a read!