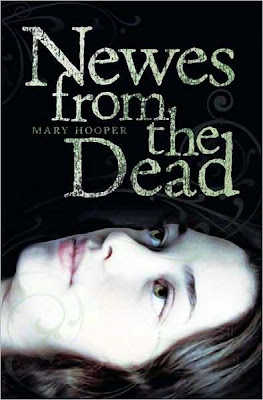 . . . for all my ghoulish fiends friends!
If you care to, you may catch up with my first two books in the RIP III Challenge:
The Walking Dead
Land of Echoes
On to the third!  Three down, one to go!
I can't even remember which blog I found this book on, but the description hooked me (no pun intended) immediately.  Based on real accounts, Newes from the Dead by Mary Hooper is a fictionalized retelling of the horrifying not-quite-death of Anne Green in 1650.
Anne awakens in darkness, but is not immediately afraid.  During the cold winter months, she always rises in darkness.  It is when she tries to move that she discovers something is terribly wrong.  It is also then that she remembers the last thing that had happened to her...she had been hanged for infanticide.  Was she now in heaven, hell, or something completely unknown?
Out in the cold, cold world, the medical college has just received a rare treat...the chance to disect a fresh corpse.  The young lady had been hanged only that morning and the students were all eager for a chance to learn.  One student in particular, Robert Matthews, is disturbed because the body does not look like others he has seen...it looks almost alive.  The lead doctor is finishing up his speech about the importance of what they are doing for the future of medicine when Robert sees the corpse's eyelids twitch...or did he?
D-I-S-T-U-R-B-I-N-G!  And on so many levels!  This is young adult fiction but I thought it was pretty creepy.  Not scary, but definitely creepy.  Hooper's description of the hanging and the near-disection as well as the time Anne spends in the jail at Oxford Castle read more like a book for adults than young adults.  I actually got a bit squeamish a time or two.  The author has included a reproduction of the actual pamphlet printed in 1651 describing the events leading up to Anne's hanging and what happened afterward.
Posted by Holley T at 1:57 PM

I don't like the idea of waking up when I ought to be dead. The whole "buried alive" thing really freaks me out. But, being dissected while alive (vivisected, I guess) is something I hadn't considered.

There is a great short story in Stephen King's collection, Everything's Eventual, that has a nearly illegally similar plot. I remember listening to it in the car and cringing with....I don't know what, but it was exhausting!