NO, NOT THAT KIND! Get your mind out of the gutter!

What I'm talking about is a graphic novel, the more grownup, literary version of a comic book. I was mentioning to Daxx the Magnificent how much I enjoyed 30 Days of Night by Steve Niles (Author) and Ben Templesmith (Illustrator) and he suggested I try The Walking Dead by by Robert Kirkman (Author), Tony Moore (Illustrator), Charlie Adlard (Illustrator), and Cliff Rathburn (Illustrator). When the R.I.P. III Challenge happened along at the same time, I knew I had to read this book for the Challenge!

The Walking Dead opens with two cops, Rick and Shane, in an altercation with a maniac. Rick is shot and the scene ends. In the next section, Rick wakes up alone in a large hospital (some of you may be channeling images from 28 Days Later at this point and you are not alone). 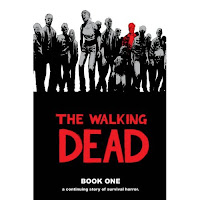 As he makes his way out of the hospital, he discovers that something is terribly wrong with the people he encounters. His biggest hint? They try to eat him. As the only live person in a sea of death, Rick fights his way out of the city in search of help as he is sure someone somewhere must be working to solve the problem. Surely the government will help! You can guess the rest.

There are unexpected surprises, devastating losses, and nasty developments galore in this gory little book, though little color. Most of the illustrations are black and white, but still capable of conveying so much. I found all of the panes without dialogue were still, despite their two dimensionality, perfectly understandable through the illustrators' renderings of marvelous and very-human facial expressions. I am happy to report that Daxx the Magnificent has recently brought me Book Two and I am so excited to get to it. Book One ended at a very pivotal moment survival-wise and I can hardly wait to see how that turns out. Highly recommended, though not for the kiddies by any means, adults only (strong language, graphic violence and gore, some sexuality: to steal from the movie industry).
Posted by Holley T at 3:35 PM

Definitely not for the kiddies...probably one of the many reasons it is so good. I am woefully behind on this series, but what I've read has been very, very good.

I enjoyed 30 Days of Night and its sequel as well.

I have a good many of the 30DON series but have only read the first. It was good enough that I bought all the others I could find, sight unseen. I'll no doubt be purchasing these as well!

I have several of them as well, in individual comic issues. I haven't read many of them, including the more recent series that had to do with Nazi's. I should pull them out for the challenge this year!

I don't have any of them in individual comic editions, but I wish I did :)

The walking dead is a great suggestion did Jake get you started on them???

Yep! I asked him to give me his top 5 favorites and it was The Walking Dead, Watchman (men?), V is for Vendetta, and 2 others I can't recall right now :)