I can hardly believe it has taken me the better part of a month to get this post together! I went, I saw, I was entranced, I was horrified...by Pan's Labyrinth. In my mind's eye, I distinctly remember it being a French movie, but it was in Spanish instead. It's been awhile since I watched a subtitled movie so there was a slight adjustment period :)
Directed by Mexican filmmaker Gillermo Del Toro, this film is set during the Spanish Civil War. One lonely little girl (Ofelia) and her heavily pregnant mother travel to an old mill in the forest where Capitan Vidal awaits his new wife and stepdaughter. As you can imagine, Capitan Vidal is an ogre of the 1st order, interested only in the fighting going on around him and the health of his unborn son. Confining his wife to a wheelchair, you rarely see them together as he apparently has already...ahem...accomplished what he set out for: an heir.
Upon first arriving, Ofelia notices a stone ruin not far from the mill and wanders over for a look. It is the arched entrance to a great stone labyrinth, crumbly and moldy with age and green with moss and ivy. An unsettling horned figure is carved in the top of the arch and Ofelia has not ventured very far inside before her absence is noted and she is retrieved by the housekeeper-type lady, Mercedes. Late one night, Ofelia is drawn back to the labyrinth by a fairy (who is at first a really disgusting bug; I would have lost my mind and certainly wouldn't have followed it anywhere!) where she meets el fauno. 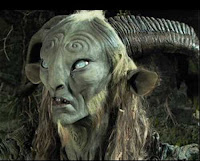 Creepy, crawly, ugly, and a little too enthusiastic about the danger he places her in, the faun tells Ofelia that she is a princess, daughter to the king/lord of the underworld, and she must complete a set of tasks to resume her rightful place in the kingdom.
Now me, I would have been very suspicious. However Ofelia is too excited to be wary and is soon off on her first task. What follows are some of the weirdest scenes and horrific monsters, human and otherwise, that I've seen in recent memory; this little bugger being the worst:

Between the torture scenes, one very Ozzy-Osborne moment courtesy of the lovely creature shown above, and the amount of killing Capitan Vidal feels is necessary to suppress the Spanish rebels, this film coasts in nicely at a Rated R. Despite the fairies and the young protagonist, Pan's Labyrinth is not cheerful, it is not funny, and there is no happy ending. That is as much of a spoiler as you'll get from me. You know the background info, now go fill in the blanks!