My friend Erica introduced me to the fun concept of the celebrity best friend. What this means is that she (and now I) KNOW that if we could meet and hang out with certain celebrities, we’d be the best of friends with them. For Erica, that person is Keira Knightley. I can see their similarities and have no reason to doubt the possibilities of a friendship between the two. As for me, I think Fergie (the singer, not the Duchess of York…although I would certainly not be averse to hanging out with her either) and I would get along pretty well as friends. I’ll take the whole concept and kick it up a notch (thanks Emeril!) by debuting my dead celebrity best friend. It’s entirely possible that I’ll have more than one if I REALLY think hard about it but for now…. 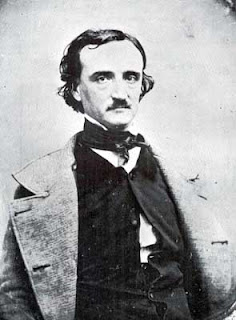 There was a USA Today article in my Bloglines inbox yesterday that got me kinda fired up and it had to do with one of my fav poets/storytellers, Edgar Allan Poe. I’ve heard it all before…darkness, depression, suicide, drugs and alcohol…I still like the guy. Maybe if he’d had better friends he wouldn’t have had such a tough time or maybe it didn’t matter, whatever. I still like him.

Let’s see…middle child, their father ditched them within a year of his birth, his mother died the year after that and he made the orphan circuit. Unhappiness trailed after him like an obedient dog through tough years at the University of Virginia, a short military career and on into his marriage to his first cousin, Virginia. By all accounts, Edgar and Virginia’s marriage was an amicable one so naturally he was devastated when she began to experience complications from tuberculosis, the scourge of the age. Her struggle with illness and eventual death in 1847 exacerbated Poe’s addictions, mostly to alcohol and it comes as no surprise that he died within two years of Virginia. His death came a mere 40 years after his birth and has been attributed to all sorts of beastly things like alcohol, drugs, cholera, rabies, suicide, tuberculosis, heart disease, brain congestion and other agents although the exact cause has never been determined (Wikipedia). Autopsies were so out-of-fashion at the time…I guess they were never in-fashion...whatever.

To make the story even better, beginning in 1949 and continuing to this day (or at least the most recent January 19th) a dark, mysterious figure leaves a bottle of cognac and three roses on Poe’s grave each year on January 19th (Poe’s birthday). At least, that has been the story up until yesterday (or that’s when I found out about this anyway). The USA Today article has the headline “Edgar Allan Poe fan takes credit for graveyard legend.” Sam Porpora led the charge to revive Poe’s resting place, then a decrepit crumbling cemetery, as a historical monument. Due to the popularity gained from the mysterious yearly deposit, Porpora succeeded. Beginning in 1977, a yearly vigil was held to watch for what had become known as the “Poe Toaster.” Now Porpora is claiming that he was a Poe Toaster and that he and a group of the site’s tour guides and caretakers cooked up the scheme in the 1960’s (by telling everyone it had been going on since 1949) in order to cement the site’s fame.

Now, I believe it is pretty $h!tty for this man to ruin everyone’s enjoyment of this mysterious tradition. I can think of another tradition which is thoroughly enjoyed by those who believe in its power...make that two traditions. Much of the world goes to great lengths to make sure this tradition stays in place as long as possible. I am comparing the Poe Taster to that because I believe it resides at that level of greatness. I personally think Porpora’s done it because he’s 92 years old and wants his fifteen minutes before his dirt nap commences. Well, I’m here to tell you now that I refuse to kowtow to his fame-hungry lies! Oh no, not me! The Poe Taster is alive and well in my imagination and looks nothing like Sam Porpora. He’s getting a pretty good bit of flack from Poe scholars and enthusiasts as well so I don’t feel that much like a freak ;)

If you haven’t read Poe here are some of my favorites: The Fall of the House of Usher, The Masque of the Red Death, The Pit and the Pendulum, The Tell-Tale Heart, and his poem, “The Bells” (is there any more fun word to say than tintinnabulation…except maybe onomatopoeia?). I will admit to the secret thought that the guy who plays Bernie from Weekend at Bernies could definitely star in a biopic of Poe.... 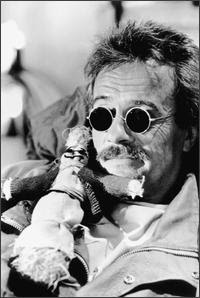 Poop on Sam Porpora! See if I ever visit HIS grave! Ptui!!!

oh wow, a DEAD celebrity best friend! the possibilities are endless! initial choices: esther, jane addams, jane austen, teddy roosevelt, baroness orczy, wow i can go on forever! it will take me a while to think of just one...

well, the only reason I thought of just one was because of the horrendous article on the stealer of literary mystery and tradition. I have tons of people I think I could consider for dead celebrity best friends...Marilyn Monroe, for instance. She needed some real friends anyway. I would have definitely told her to drop JFK like a hot rock!