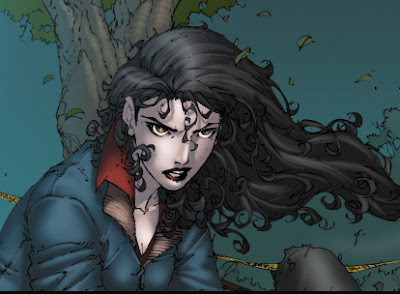 
. . . . that Katie has now been tapped into the Anita Blake fan club! She is about 5 books in at this point (has cheated a little and skipped ahead to the best part of A Killing Dance...uh huh, ya'll know what I'm talking about) and told me today that she was going to B-a-M to buy as many as they had (or that's what it'll end up being anyway!) so she could finish them all! I told her there'd be no stopping once she started...the darkness has you and it's niiiiiiiice :)

She has suggested an impromptu Anita Blake bookclub meal sometime to discuss.
T, after my firm vow not to discuss Richard with her, I did tell KT that I wouldn't piss on Richard if he were on fire. oooops. I did try. I didn't tell her why though so I held back on the important stuff 'cause I want her to form her own opinion about the sniveling, good-for-nothing (well...not "nothing"), whiney little pissant. Oh, did I type that out loud?
I feel honor bound to start the series over again now, but it demands so much of your attention! I won't be able to get AnYtHiNg done due to the sheer gravitational pull of the series. Yes people, I'm that big a fan. Deal with it.
KP, did you ever mention the series to your wife? If so, what does she think (if she decided to delve in)?
At this point I guess it's important to mention the other important person in the series, um...the author. Laurell K. Hamilton.
Posted by Holley T at 11:43 AM

i absolutely LOATHE richard! he makes me want to scream and hit things! the whiny jerk...

and yes, a book discussion meal on anita blake would ROCK! count me in, whenever ;)