and a good time was had by all

KT invited me to Essie's family b'day party tonight...she turned a whopping 5 years old! Just think KT, for three days Essie and E will be the same age. Does she realize that I wonder? Something tells me E would be non too pleased to be ousted out of her position as biggest big sister if she knew :) Ah well, nothing to worry about as Saturday will be here in no time and E can reclaim her 6 year old throne of eldest sister. 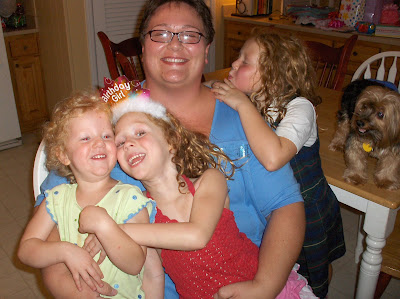 I wanted a picture with all three girls, which KT graciously agreed to take...especially embarrassing after I wondered aloud where I could sit it to use the timer when there were 4 other adults in the room. KT graciously didn't point this out to me but let me arrive there in my own time. The great part, Toonie (short for Petunia) ended up in the photo with us! Just after the photo, Essie whispered in my ear, "Aunt Holley, your tummy feels like a bean bag."

What I wanted to say - "and it looks like one too"

With a sage nod, she scampered off to cause mischief. 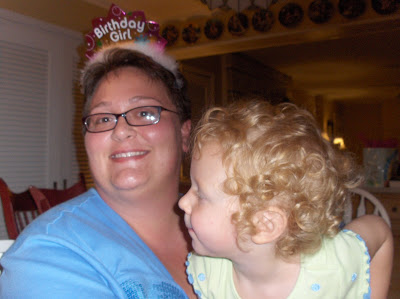 What is it about wearing the Birthday Girl tiara that makes you feel special, even if it isn't your birthday? P-toes doesn't know and thinks I shouldn't worry about it either, so we'll just let that one go. 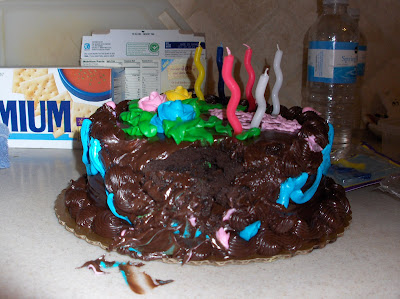 No one is certain what happened here...P-toes would have been a good guess but the rumor was that it was Nana. Unfortunately, she had no testimony on her own behalf. She was witnessed in the vecinity of the cake WITH a fork but she claims that evidence is only circumstantial in nature. It was tasty anyway! 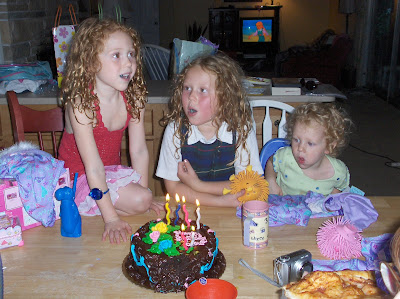 and the grand finale:

After the pizza, cake, and presents, the girls were bundled off for baths and then we all sat around and talked over a wonder My Little Ponies video. There was much huffing and puffing on E's part since we were laughing and joking quite loudly. P-toes manage to get both legs in one leg of her new Tinkerbell pj's (all three girls got a matching set). She looked kinda like Vanna White back in the day, except with a pant leg trailing behind her like Barney's tail. Alas, she had no balance and teetered precariously but Auntie got her straightened out. Essie spun around in a office chair until she got dizzy and fell off, waited a few minutes and did it all again. KT's husband D was petting Toonie in his lap but she got into a little-dog-smackdown with Noodle and one of the girls said, "Daddy, you started a dog fight!" Couldn't you just hear that story later on, "It was my birthday, I got presents and we ate cake then Daddy started a dog fight!" It would have been funny for me, no so much for D.

The evening ended too soon, as all good times must. It was past the girls bed time and I had a long drive back home as well. I bundled myself in my car as KT and D got the girls buckled into their minivan and the party was officially done. I would have been sad except for the fact that there'll be a GiAnT PaRtAy for both girls on Saturday complete with water slide, water sprinkler and various lawn games. I'll miss a good bit of it as I have to work but KT has promised to save a blue cheese burger for me.

Now it's past my bedtime too, night ya'll!

you're so much fun, aunt h!

I do my best...and my best is usually pretty darn good
;)
h