Did you all see the little news piece about the douchbag from Sweden who threw his bronze medal to the podium and stomped off like a two-year old. Allegedly there were some ill-feelings on his part about an allegedly poor officiating mishap which resulted his not being able to compete for the gold medal, where he obviously thought his talents lie (lay?). He had to be physically restrained at one point after the ruling, then he was all huffy about being offered the chance to compete for the bronze medal, which his friends/teammates talked him into doing anyway. He won the medal and decided to cinch his crowning achievement with a fit of pique. This really pisses me off because I firmly believe that whoever came in fourth place would have give one (possibly both) testicles to have gladly taken the third spot on that podium...possibly even with a tear in his manly wrestler eye. What an insult to all the wonderful athletes who've won bronze medals in this competition! He basically called them losers without saying a word. 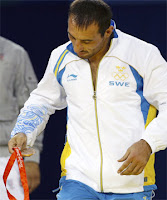 Also, the ICO voted to remove softball and baseball from the games list after this Olympic session because the United States wins too much (okay, because they are considered "too American" to have worldwide appeal). WTF? Look at our gymnastics and swim team coaching staff. Who are they? Professional gymnasts and swimmers who are from other countries with outstanding histories in each sport. Why? Because they are f$%^ing good at what they do and we want to capitalize on that talent. Instead of wah-wah-wahing all the way home, break out some of the money you're spending trying to keep up and hire a U.S. coach for your softball team. It sounds fair to me. If we're taking other nations' coaches/athletes to improve our teams, you should be able to do the same with no censure from anyone. Have at it, but don't get rid of the sport just because you have a hard time winning it.
Anyway, just my 2cents...feel free to let the filleting begin if you have a differing opinion, you are welcome here too!
night ya'll!
htw
Posted by Holley T at 9:31 PM

i agree with everything you said here!

I heard later on that they did strip his medal but they didn't pass it on since the sanction didn't have anything to do with the competition...I would have given it to the 4th place guy anyway just to shove home the point that you may not act like a douchebag and be rewarded. Anyway, at least there was some punishment involved!

I read in an article that this guy makes a habit of this behavior. maybe they should think about banning him from the sport for poor sportsmanship. It wouldn't hurt my feelings and maybe he would learn a lesson.

One of the articles I read said he was quitting the sport, sort of a "you can't fire me, I quit" sort of copouts...I say again, douchebag!