Confessions of a Shopaholic by Sophie Kinsella 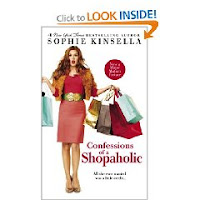 Confessions of a Shopaholic has been consistently popular since it was published and now, with the movie coming out, I figured it was time to jump on the bandwagon and see for myself what all the hype was about.

I have to admit, I was underwhelmed. It was very British and quite funny and cute to begin with but Rebecca’s increasingly psychotic denial of her financial difficulties quickly began to get on my nerves. I remember occasionally overdrawing my account when I was in college and a few years afterward but I was always so conscious of not having any money that I just couldn’t wrap my mind around ignoring that fact and buying all that crap. I sure as hell didn’t have a credit card!

I read science fiction regularly so it isn’t as if I have no practice with suspension of disbelief. I really don’t know why I had such a problem with this. I just didn’t find a shred of camaraderie with nor sympathy for Ms. Rebecca Bloomwood except in her most embarrassing situations. Even then, it was cringing, not sympathizing. The only redeeming moment for me was Rebecca’s appearance on the Morning Coffee TV show. She was focused on doing something good for someone else without much thought as to what the consequences would be for her. Unfortunately, after her insightful success, why is she suddenly happy? Because she can now get rid of the harassing bank manager and get more stuff. I saw a momentary change of behavior and thought but no real evidence of a life change. I figured that out A) because of the QVC incident and B) because there are several more books in the series, all titled with Shopaholic (none of which I plan to read at this point).

I apologize to the legions of fans out there, but it was just too self-centered a novel for me. This opinion is gathered without having read the full series and I take personal responsibility for that, but I have too many books to read to persevere with a bunch more when I wasn’t just blown away by the first in the series.

Some Shopaholic readalikes of sort with more likeable characters (and all this is IMHO, btw) are Jane Porter's Frog Prince and Ellen Shanman's Everything Nice. They aren't stunning leeterahtour, but I laughed and sniffled and enjoyed myself thoroughly while I read them. Can you really ask for all that much more from a good book?