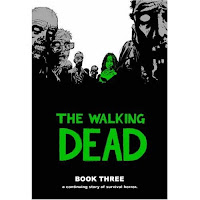 There is very little I like better than a good post-apocalyptic zombie tale and The Walking Dead series is a very good post-apocalyptic zombie tale!  Mucho kudos to Daxx the Magnificent for not only bringing it to my attention but also letting me read his own personal beloved copies.  I was mentioning to Daxx that I had read 30 Days of Night and thoroughly enjoyed it and he said that if I liked 30DoN then I would LoVe the Walking Dead...he was not wrong!
These have been my first forays into the world of comics/graphic novels and I will start of by saying that in no way is The Walking Dead series intended for anything but an adult audience.  There are zombies for crying out loud and they are doing all sorts of gross zombie things.  This also rules out readers of a squeamish bent.  The only thing saving it is that these, or the collected editions at any rate as I have not seen the individual issues, are in black and white.  Even I would be a bit nauseous if these stories were in full anatomical color.  Also, there are adulterous affairs, sexual assignations, and other crimes of varying degrees of violence fully illustrated for the reader.  Just so you know.
Anyway, The Walking Dead series follows a group of survivors as they search desperately for a place to call their own amongst the constant carnage.  All American cities that they know of have been overrun with zombies and the creatures follow them around, occasionally picking off one of their number.  Place after place after place of seeming safety reveals itself as a trap of sorts and the sleeplessness, stress, and isolation quickly take their tole.  This is a dark tale of survival, crushing loneliness, and the bedraggled shreds of hope that won't be denied.
Similarities to the film 28 Days Later are impossible to ignore, but that is one of my favorite movies so it doesn't bother me.
Posted by Holley T at 12:52 PM