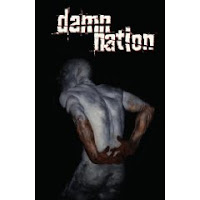 A long lost Russian cargo ship turns up in a port, all crew dead (or so they think). One twitching, desiccated body later, a vampiric plague is loosed upon the U.S. Five years of carnage later, a message is received by the U.S. Government (which has sought asylum in London) saying there is a cure. An elite team of operatives is dispatched to secure it but they soon discover that not everyone is eager for the resurgence of America as a superpower.

I found this graphic novel through Amazon’s “Customers who bought this item also bought” feature when I was linking through to the Walking Dead series. It looked good and had a good description so I decided to give it a try. Damn Nation was not a bad effort, but it suffered severely from following so closely in the footsteps of The Walking Dead. The artwork is good and the premise is great but the character development just wasn’t there for me. I wish the author had taken more time, made it a bigger book, and really gotten into the depths of the story. So much of it seemed glossed over. Character development is something that I consider to be tricky business in graphic novels and something that The Walking Dead series does so well through facial expression (wickedly done in two dimensions) and great dialogue.
Posted by Holley T at 3:49 PM

Oh wow! Love Zombies! ;) Love movies about them more. I've slowly been getting back into books though. What was that book...WORLD WAR Z? It was a super audio!