Sea of Poppies by Amitav Ghosh 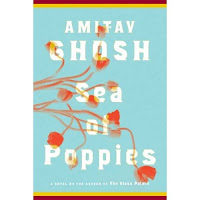 Amitav Ghosh’s lured me in because of the starred review it received from Publisher’s Weekly and the phrase “Diaspora, myth and a fascinating language mashup propel the Rubik's cube of plots in Ghosh's picaresque epic” hit every high note that I enjoy in a novel.

Yeah well, it was ultimately the “fascinating language mashup” that sort of brought the level of enjoyment down a few notches for me.  There were so many italicized words of Bengali, Hindustani, and the real mashup of the sailor’s language that I kind of spaced out.  Most of them were followed by the English translation but I still got sort of bogged down in all the explanation.

What I did like about this book was the view of 19th century it provided and the cast of characters was great.  Deeti is a strong woman for her time, willing to leave everything behind for a chance at a better life.  Zachary Reid, despite his youth, is well on his way to becoming a great man capable of making a difference in the world.  Paulette Lambert, stranded and an outcast in what she thought was her rightful home, does what it takes to escape those who would pursue her.  I don’t quite know what to say about Neel.  I’ll just leave it at saying that personal growth rarely comes at such a price as he pays as a result of his naivety.

This story revolves around the poppy plant and it's devilish offspring, opium, as well as ships, boats, and water…rivers, tributaries, and the menacing Black Water (the best I can tell).  This rather longish novel (528 pages) makes way much like a boat being oared against the current.  There are fast moving places where you make a lot of headway but there are also slow moving parts of the plot that make you want to give it up and take on a new task.  Ultimately, I’m glad I finished the book.  It wasn’t one of the best I’ve read but it was by no means the worst.  I will definitely be recommending it to my friends and patrons who enjoy more involved historical fiction.

You mentioned had a review from Publisher’s Weekly. Are you a subscriber or was the review on Amazon?

This is a multi-faceted answer so I apologize in advance. The library I work for subscribes to Publisher's Weekly, Library Journal, Booklist, and Advance and that is what we use to order books (as far as selecting them is concerned). I read reviews for Sea of Poppies in all of them. That being said, this particular snippet I did pull from Amazon but I vaguely remembered reading it too. My coworker and I are both pretty bad about having our respective social cataloging sites up (LibraryThing for her, Shelfari for me) so we can put things in our Want to Read file as we come across interesting reviews. :)