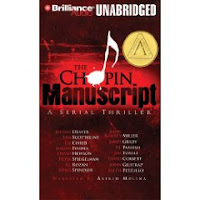 The Chopin Manuscript is a weird little book in a couple of ways:

It was a fairly exciting story that kept me interested until the very end, but those different authors and different writing styles began to take their toll after awhile and choppiness abounded.  I expected more Da Vinci Code and less agonized introspection.  The bad guys didn’t seem quite as bad as I wanted them to be (except for one VeRy bad guy…and I never saw that one coming) and the good guys always got out of trouble immediately.  I know they were going for a tense, DVC-esque tale of intrigue, and it wasn’t bad, but it wasn’t tense and edgy either.  In the end it didn’t resonate with me in any way, it was just a decent story.  Again, Molina is a great narrator!  I’m going to have to look him up and see if he has any other work.