To Seduce a Texan by Georgina Gentry 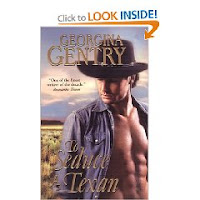 First off, I have to apologize to all Ms. Gentry's fans throughout the world.
Second, I thought this was one of the worst romance novels of my reading career.  I just couldn't get the honorable Confederate soldier bit.  If you feel so bad about the orders to kill innocent black people, why are you in the Confederate army?
Also, I came across this in a discussion forum on plus-size heroines.  To me, a plus size heroine does not spend 95% of the book telling herself how worthless and repulsive she is.
So, some "honorable Confederate soldiers" disobey direct orders to murder a military unit of black soldiers who'd surrendered.  Their commander demands $50,000 (the Confederate army is broke after all) or they'll be court marshalled.  So they've travelled out West to rob a bank to get the money.  Unfortunately, the town they've chosen recently built a Union fort nearby and the town is overrun with Union soldiers.  They decide to kidnap the banker's stepdaughter, whom the banker is not sad to see go.  The soldiers find themselves saddled with a helpless young lady who can do nothing for herself.  The banker is delighted that his stepdaughter, who was set to inherit the bank on her birthday, is out of the picture.  Love ensues.  Lies threaten.  Affection prevales.  You get the picture.
I was not convinced.  The Waco's hokey, fake Texan dialect (yes, his nickname is Waco because that's where his ranch is), Rosemary's constant laments about how worthless and repulsive she is, and a host of other weak plot points just withered any interest I had in the book.  I skimmed to the end just to make sure there were no surprises.  All romance has a reader, else Harlequin would not still be doing business, but this title was not for me.
Posted by Holley T at 8:15 PM

As much as I like 'trashy romances', I don't think I would have made it as far as you did. Nice eye-candy on the front, though. ;-)

i do love a good smutty book every now and again, but this one does sound truly awful.