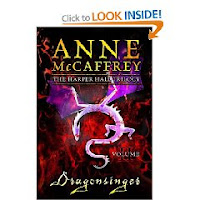 As I mentioned earlier, the Harper Hall trilogy of Anne McCaffrey's Pern novels is one of my absolute favorites.  Dragonsinger takes up Menolly's story after she travels to the Harper Hall to begin her training as a Harper.  She has teachers she likes and teachers she hates, much like any school girl, but she can now make use of her musical gifts unlike when she was severely punished for doing so in her Sea Hold.
I love to struggle with her through making friends in the hall, dealing with spiteful girls who are jealous of her talent, and her travails in finding her place in a craft she had thought denied to her for so long.
Her earliest friend in the Harper Craft Hall is a young boy named Piemur, apprenticed to the voice Master of the Hall due to his unparalleled singing ability.  Her worst enemy is a young lady named Pona, one of the paying students of the hall and a spiteful child who hates Menolly not only for her talent but also for her higher rank as daughter of a Sea Holder.  As she navigates the unfamiliar social mazes of life in the Harper Hall, Menolly comes to realize her own strength and selfworth.  I could go on and on but I will leave it at that, since the end of the trilogy is coming up with Dragondrums.  I'm almost finished with it :)
I'll say again that this is a great coming-of-age story that I enjoyed as a young adult and continue to enjoy today.
Posted by Holley T at 8:39 PM