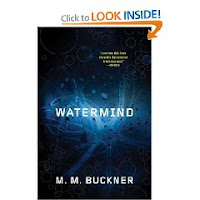 I was very intrigued by the premise of Watermind...a blob of trash comprised of all the debris from our society's disposable electronices (cell phones, appliances, genetically modified foods, stem cells, old computers, defunt televisions, etc) composes itself into a water-borne neural net and starts to explore the swampy environment of the Louisiana bayou.  I know, cool huh?  Unfortunately, this book could have done with some serious additional editing.  The choppy date and time chapter divisions made the pacing tedious, all the characters pissed me off except Max, and there were a couple of purely superfluous characters taking up space that could have been shaved off.  What the hell did Rayette contribute to the story?  That whole plot line could have been wiped out to the shortening and betterment off the story.
The Publisher's Weekly review on Amazon has summed this up for me:  "Despite the suspense and nonstop action, unlikable characters make it hard to root for anyone, and the scientifically sound ending is narratively unsatisfying. The story succeeds best when it traverses Louisiana's geography, and only indifferently when it traverses the human heart."

Exactly. It was a great idea, but it was sloppily handled. Lots of repetitions of points, too many characters who didn't do anything but carry a Creole surname, too little action spread out over way too many pages. If the story were tightened up...maybe half the length, a novella or trade/mass market, then I believe it would have been much better. It feels, to me, like a short story that someone pushed to novel length without enough material. Well, now I'm repeating myself so I'll stop there. I was disappointed.
Posted by Holley T at 12:57 PM