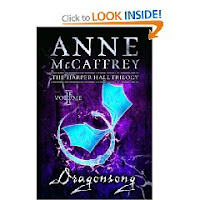 I've read many books in McCaffrey's legendary Dragons of Pern novels, though none of the more recent that she has been writing with her son or the Acorna books I'm sad to say.  Out of all the one's I've read, the Harper Hall Trilogy is my absolute favorite.  These people are like family to me and I read and listen to the audiobook of this trilogy AT LEAST once every year...I like it that much!
Dragonsong is the first in the trilogy and introduces most of the cast of characters that you will come to love in the next two novels, Dragonsinger and Dragondrums (which of course I'm listening to now and you will get here in coming weeks!).
*Note-my spelling may be off from time to time, please forgive me*
Menolly, at 15, is the youngest daughter of the Sea Holder of Half Circle Sea Hold and the only one truly unhappy to be there.  Gifted musically, she spends her days tending to the sea hold's elderly Harper, Petterin.  I guess I should back up and say that the Harper craft is one of the most venerable on Pern.  Also, They are the teachers, singers, and keepers of history for the planet pretty much.  After Petterin passes away, Menolly has no support of her musical gifts at all and is persecuted for them in fact.  Her father believes that girls cannot be Harpers and that Menolly's music is simple tuning and twiddles.
Another bit of background for those new to the series.  The Pernese people have bred a race of dragons to fight the menace of Thread, spor-like thingies thrown down on Pern when the Red Star passes close enough.  Thread dissolve/eat anything organic and you can imagine the havoc that causes I'm sure.
I won't describe every single thing that goes on because that would not be fair to new readers but suffice it to say that Menolly decides that death would be preferable to living without music and she decides to live Holdless.  She gets unexpected help from an indigenous species of the planet that had long passed into mythical status.  She learns to live on her own, gets to play her music, and has friends galore in her cave by the sea.  It is only when she is rescued from Threadfall and taken to the local dragon weir that her life truly begins to change for the better.
I have not done a credible job at all of conveying how lovely these books are but I hope you are intrigued nonetheless!
Posted by Holley T at 8:13 PM

I am VERY intrigued, and have just added this series to my "TBCO" (to be checked out) list at the library. Thanks for being such a great reviewer!