I can hardly express to you what has been going on since I got home on 12/8 from petsitting. There has been some HaRd LaBoR going on at Holley's (actual) House! I have scrubbed, swept, bagged, hauled and cursed more accumulated crap than any one person should have to in one week. I'm surviving on a variety of energy drinks and quite a bit of Aleve.

I'll just start with Saturday. I asked my dad if I could borrow his "little white truck" to finish moving the big stuff that Mrs Roomie had yet to get. Now, I've seen my dad's little toy before but never really looked at it. I get over to his house to pickup the truck and it is the tiniest, itty-bittiest thing you've ever seen! The steering wheel is on the right-hand side, all the stickers and labels where in either Chinese or Japanese, and did I mention it was tiny? I'm talking about the Daihatsu Hijet, people! The next big problem.....I am WAY TOO fat to be driving this little tin can. I had to roll the window down in order to have a modicum of comfort. Everytime I squirmed I turned the windshield wipers and the blinkers on with my knees. There was an AM radio, but it didn't work so I was alone with my thoughts....and my thoughts and I had a top speed of 25 mph, excuse me, 40 kmh on the 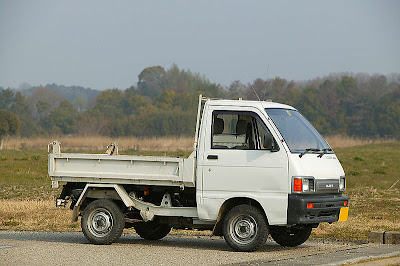 little Hijetj's speedometer. It was a long, arduous and humiliating experience. Based on the criteria above, the amount of staring I was getting could have been based on any number of factors.

I feel compelled to mention something I witnessed on the way to my dad's house to pickup the iron maiden. I passed a house and two kids were running around outside. They must have had a Christmas program of some kind to participate in because the boy was dressed as Santa and the girl had something festive as well. I'll describe it instead of telling you since I'm sure you'll guess it along the way. She had on an obviously (hopefully) home-made full length skirt that was green down to her knees, then red with gold embroidery down to her feet. The young lady also had on a green turtleneck with a green bath towel worn poncho-style and belted with garland. She had a star on her head and gift packages attached to her shoes. That's right! She was dressed as a Christmas tree! I am SO doing that for Halloween next year!

The only time during the day that the fat girl in the little truck was not the center of attention occurred late in the afternoon. I had just dropped off a load of belongings at Mrs Roomie's new abode and got in a bit of a traffic snarl. People were out in their yards and leaning out of their cars and I figured someone had had a fenderbender or someone's dog had bit the dust. A lady with blond mall hair and a very pretty pink sweater was marching purposefully down the road past 4 or 5 guys who were conferring about something. She walked out into the road and I lost sight of her because of the cars in front of me. She appeared quite quickly on the other side of the road pulling a dead goat by the horn. Someone had run over it and it took a blond in a pink sweater to just grab it and drag it out of the road. The men looked on admiringly, as if they wished they'd thought of that.

On the philosophical/esoteric side of that day's happenings, I was driving back to the petsitting gig so the dogs could have a last potty break before their mom got home. It was very nearly dark and I could see something small running down the side of the interstate. With visions of sweaters and goats running through my head, I began to honk my horn to scare the creature into the trees (and hopefully not into traffic). The little beast paid me no heed but continued pellmell down the shoulder. When I got close enough to identify the species of creature so enjoying the taunting of death, I discovered it was a witches' hat blowing down the road. New glasses, perhaps?

Yesterday I wrote a note to myself to blog about something a patron had done that annoyed me then promptly forgot about it...like I do. I found the note when I got to work today and it reminded me of the situation but I was no longer annoyed at the patron. They had asked me where Philip Margolin's books would be. I said they would be in the fiction in the "M" section (seemed pretty straightforward to me) under Margolin. The patron pointed at the aisle which is designated "K-M" on one side and "M-R" on the other and said, "So M will be down that aisle there?" That annoyed me, because I'd just showed him where the M's were not to mention the fact that he was in his 40's and should damn well know where M falls in the alphabet. In my note however, this is what I wrote,"...in the M's, down that I'll there..." I'm just as ignorant as the next person I suppose. Speaking of suppose, one of my regular freak brigade came in and wanted to know about the teen who was "supposively" killed in a car accident over the weekend. She knows I don't live around here. I live 47 miles away. How am I supposed to know what goes on here during the weekend, especially one I haven't worked?

Today's endeavors were legion. I made two trips with stuff over to Mrs Roomie's new abode, she and her nephew are supposed to come pick up the VERY LAST bit of her stuff tonight while I'm a work, I put my new coffee table and end tables together, cleaned the laundry room, put up hardware and a new shower curtain in the (now) guest bathroom.....All that's left to do before the big party on Saturday is just windowdressing. I'm in the homestretch and the house looks great! Not to mention I finally let Binky out and she has been having the best time rediscovering the rest of the house. She has systematically napped on all of the new furniture and I am thrilled with that!

I have usually been getting home from work and cleaning until midnight or 1am but my mom has to have some tests done tomorrow and we have to be at the doctors at 7:30am. If you imagine the doctor, my mom, and me as the points on an equilateral triangle, I have to leave my house at 5:30 to pick her up at 6:30 to get to the hospital at 7:30...but I like watching the sun come up with a cup of coffee in my hand and the sound of the road beneath my tires.

Okay, that bit of corniness signals that it is late, we still have 30 minutes til closing, and that I have obviously run out of things to share :) Thanks for hanging in there (if you did!)

that goat story is hilarious!

Wow, I can't even begin to respond to all of that, but I have to say that I can't WAIT to meet you someday!
Your Dad's truck rules.