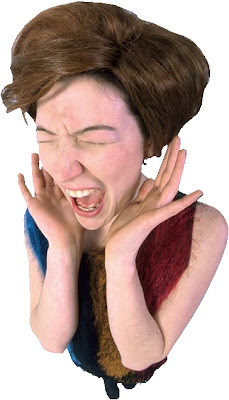 A semi-regular patron just came in with her daughter to get a book for the daughter's school assignment and I was recommending a grown-up book for her since she was so slogged down with kids-in-school syndrome. The book I recommended by the way was Elizabeth Gilbert's Eat, Pray, L0ve....ya'll should read it too if you haven't heard of it! I asked her if she'd seen the Oprah interview, she mentioned their tv went out and they haven't gotten a new one yet, I mentioned I didn't watch tv unless I was petsitting, and her eyes lit up. "You petsit?!" I admitted that I did and she told me that she'd just had a petsitter stay over that she didn't know. While the fam was gone the petsitter had her dredded-out boyfriend over and they proceeded to "christen" the house, including the patron's family heirloom 200-year old bed which they
B
R
O
K
E!!!!!!!!!!!!!!!!!
She mentioned finding dredlock hair in the shower as well.

I was speechless. I had to shoo her away as she kept sharing details about the horrible-ness visited upon her by the errant petsitter.

They should hire YOU: No dreadlocks.

They should hire YOU: No dreadlocks.

Oh no, I hit "publish your comment" twice by mistake!

that's alright...they SHOULD hire me :) I've got bills to pay and crappy stuff to buy :)
htw