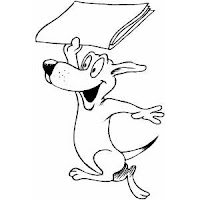 T's owner taught him to fetch the paper and asked me to keep up the routine if I could while I was there so he wouldn't lose the training. I have only taken care of one other dog that had been taught a trick and it's alot of fun to see. Y would fall over and play dead if you pointed your finger at him and said "Bang!". Now, Y was a rescue dog and came to the current owners already trained that way. I can't say that it was a great trick given its implications, but he loved the attention :)
T's fetching of the paper this morning was so much fun! What can I say, I'm easy to amuse. Right after he had finished eating I started ramping him up, "T, are you ready to get the paper? Let's go get the paper! Paper, paper, paper!" Poor pooch, he was quivering at the door, just vibrating with excitement about getting to go out and get the paper. I opened the door and he leapt out, nose to the ground!
It was still dark outside and I lost sight of him but pretty soon I heard the telltale rattle of plastic and T came charging triumphantly back in the house with his mouth full of newspaper, and he didn't even rip any of the plastic. I squealed and clapped and there was some serious scratching and belly-rubbing going on...he was so proud of himself! C was barking and prancing around too! I dispensed treats all around and I don't think I'll have any problems keeping T fresh on his training. I had fun, he and C had fun, we'll just have to see how he handles the mammoth Sunday paper:)
Adiós!
htw
Posted by Holley T at 10:02 AM