cast thine eyes to the heavens...

...and read this entry from a blog called Bad Astronomy... I don't understand everything, but I do understand this:

The system is totally awe-inspiring. The pulsar spins 182 times per second; that’s faster than a kitchen blender’s blade. The second star was detected because as it orbits the pulsar the pulsar orbits it. It turns out that the second star, the one being drained, orbits the pulsar at a distance of 230,000 miles — the same distance the Moon orbits the Earth. However, instead of taking a month to orbit as the Moon does, this star orbits the pulsar once every 55 minutes! Imagine: an object that is far more massive than Jupiter, being tossed around at well over one million miles per hour! Neutron stars are scary.

Science is so cool! I wish I were capable of understanding more of it.... 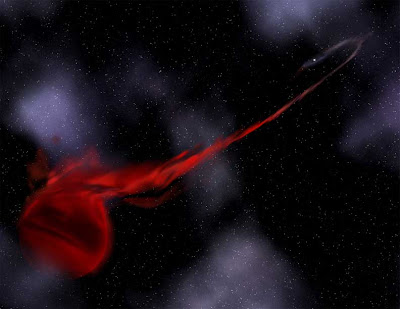 The little bright dot is the pulsar, the big red poof is the planet-sized mass.
Posted by Holley T at 2:53 PM