I have no idea why this has taken so long, but I have finally got the pic's of my tattoo off the digital camera and onto a CD! Here 'tis! 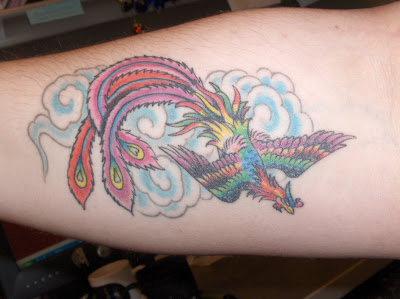 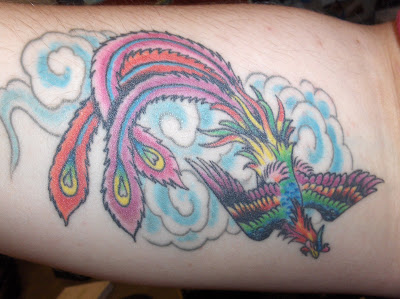 I should have put something next to it for perspective, but it's on the inside of my forearm right up against the bend of my elbow and is about the size of a 4x6 index card...maybe a little bigger. Definitely bigger than most people figure a librarian should have :) Katie's (then) 3 and 4 year old daughters named him Rainbow Rambin...I have no idea, but it's cute :)

This is my first tattoo and I got it in late 2001, as a gift to myself when I got hired full time at the library 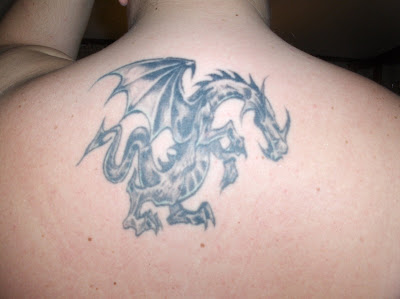 This was an awkward picture to get because I tried to take it myself, got the timer mixed up and the first time ended up taking a VERY UNEXPECTED nude photo...I'm surprised the camera didn't burst into flames and run screaming from the house! I got the little buggar figured out though, and here we are. My niece named this guy Thadeus when she was just 5 years old and I have no idea where she even heard that name at that age, but Thadeus it is. He's my special guy :)

I'm still in the planning stages for my next one, which will be book/literature related. So much to choose from!

absolutely love the tats can't wait till I get one!!!

P.S. The nude photo anecdote made me laugh!