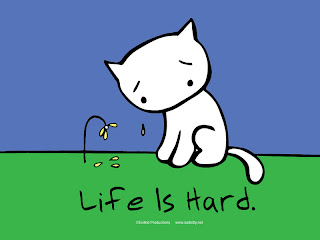 I admit it! I was going to lie, but KP (excellent art today, BTW!) left a comment welcoming The Doorman to the fold on a previous post and I started feeling guilty on top of embarrassed and here we are.
So I bought The Doorman on Sunday and he had gone to the big fishbowl in the sky by the time I got home last night. I described his symptoms to a coworker and she diagnosed him as having "ick" and that I should get some "ick medicine". I will get the ick medicine before I get another fish because it was so pitiful to have to dip his little body out of the bowl and dispose of it. I didn't even have time to get to know him so I could be sad instead of embarrassed. We've determined that it was probably a water issue despite the conditioning tablets I used that were supposed to take care of that. I think I'll have to find somewhere to place the bowl that keeps it warmer too. Maybe I'll try a fish at work instead of at home and see if I have more success. I have a petsitting job coming up, so I'll wait until after that to try fish husbandry again.
htw
Posted by Holley T at 5:13 PM

Oh....that's sad. Poor little fella. One of our fish died a couple days ago, too. No ick, though. It's a mystery.

Oh, and thanks for liking the art
;)

Yep, I felt pretty bad about :( I have never had a lot of luck with fish as pets, thus the drive to have one now but they keep thwarting me :(