I hate to repeat myself.... 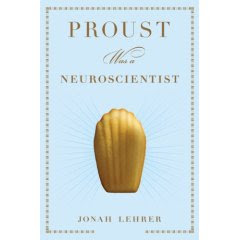 ....ok, that's not entirely true but certainly I don't like to repeat myself often. I posted this book review on my library's website too but I am just so excited about this book that I'll (mostly) shamelessly post the review here as well. This book has gotten some less than complimentary professional reviews which I'll not even link to here because I don't want to give them extra traffic. They are obviously snobs with no sense of common readership *raspberry*

So, without further ado, if you'd like to discover what umami and neuroscience have in common, READ ON!
---------------------
I have claimed loud and often that I am not a reader of nonfiction and it has been brought to my attention that this is not completely true. Apparently, I like narrative nonfiction (a.k.a. “creative nonfiction”; a.k.a. “literary nonfiction”) which Wikipedia defines as:

But I digress. The last few nonfiction books I’ve been really excited about were Timothy Egan’s The Worst Hard Time: The Untold Story of Those Who Survived the Great American Dust Bowl (2006 National Book Award winner for nonfiction) and Elizabeth Gilbert’s Eat, Pray, Love: One Woman’s Search For Everything Across Italy, India and Indonesia (This book is so SMOKIN’ HOT right now that the 31 books in our library system have 72 holds waiting and the 5 audiobooks in the system have 12 holds. I field at least 4-5 questions per day about this title.) This is only a teensy bit of tooting my own horn for my good-book-sniffing-out talent and a whole lot of go-out-and-get-a-copy-for-yourself-and-see suggestion. On with the show!

I discovered this book by way of the library’s subscription to Seed, a science & culture magazine. I looked up their website, liked what I saw, and subscribed to their RSS feed. The blog site for Seed Magazine is called ScienceBlogs and has dozens of different topic sections. Among those, I stumbled across Jonah Lehrer’s blog, The Frontal Cortex, and enjoyed it thoroughly. That is also where I discovered he was about to publish his first book and there this tale ends but the book, Proust Was a Neuroscientist, is just beginning its rise in popularity. In just over 200 pages, Lehrer shares A LOT of neuroscience that is surprisingly easy to follow due to the arrangement of the book as a series of eight vignettes. The eight people included in the book are Walt Whitman, George Eliot, Auguste Escoffier, Marcel Proust, Paul Cézanne, Igor Stravinsky, Gertrude Stein and Virginia Woolf. Lehrer looks at each person’s work and shows how they anticipated modern neuroscience. My favorite chapters: Whitman and his intuitive use of self and feeling; Escoffier’s understanding of the human palate and the then-unknown umami; and Marcel Proust’s grasp of ephemeral memory.

I wavered over reading this book because I liked the author and had enjoyed his blog posts but could not imagine neuroscience being an interesting topic. His easy writing style and use of analogies and anecdotes kept all but the most lofty talk of brain anatomy and neural pathways both palatable and accessible (a.k.a. I felt REALLY smart when I finished the book and could sort of converse about it). I told the library’s book group members about it at their meeting yesterday (that would be Tuesday now) and many of them were pretty excited about it! So, long story still long, learn about neuroscience this year by reading Jonah Lehrer’s Proust Was a Neuroscientist!
------------------
So that was my review for the library's website, but since then I've typed up (for my own nerdy benefit) some of the passages from the book that I found most interesting. At some point I'll have a cohesive essay-type document from those notes but it is still a work in progress. I hope some of you will go out and get a copy for yourself!