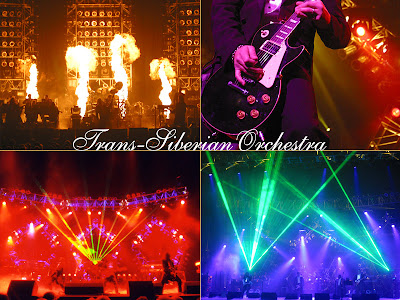 Well folks, I’m still in awe of my experience seeing the Trans Siberian Orchestra for the first time! To start off the night, I met my brother and his fam for dinner. We were going for P.F. Chang’s. I got there first and was charged with throwing our names in the hat for a table. They looked to be at full capacity, but I requested the table for 6, took the beeper with me and picked a portion of the wall to hold up. About 20 minutes later the beeper went off. I thought to myself, “that was quick” and walked back in. They had paged the beeper for me to come in so they could tell me that the wait would be 120-130 minutes for a table for 6. How pretentious! Just say it’s a 2 hour wait, you big DA! So I called Dave to tell him and we went somewhere else. We did take the beeper with us, but Dave was struck with some guilt so we took it back after we ate and gave it to some people out front of the restaurant waiting for a table. We had no way of knowing if they had summoned us or not, but the group didn’t seem to care and were excited about the chance to possibly cut the line ;-) I thought it was pretty funny myself. On to the concert!

The DJ’s on the radio station which hosted the concert described TSO as “the Phantom of the Opera meets The Who, with Pink Floyd’s laser show” and I must say that was pretty accurate. There were various kinds of lights, lasers and strobes with pyrotechnics also (things exploded, things spun, gouts of flamed rent the air and changed colors!!!) and THE BAND WAS ROCKIN’! At midnight, they had the ever-present balloon drop and these cannon-like things pumped millions of gallons of confetti into the air. Let’s just put it this way, the last concert I saw was Metallica at Lakewood Amphitheater in Atlanta. This was SO comparable, except the TSO played some Christmas music, none of the roadies flashed their boobs (or any other comparable body parts) to crowd, and I never once got a whiff of pot during the entire concert ;-)

At the end of the concert, after the balloon drop, I thought we were getting ready for encores and stuff. Some people had already left and more were making their way down the aisles when the lead TSO guitarist starts telling a story about his early years somewhere in New England. All of a sudden Tommy Shaw, the lead singer for Styx, is running out on stage, the band kicks in and we’re off for another 30 minutes or so with an impromptu Styx concert. The crowd went NUTS! This guy in front of us, who had sat placidly through the preceding 2.5 hours of concert, surges to his feet, nearly braining his girlfriend/spouse with a flailing elbow, screaming mindlessly and making the universal sign for “rock concert”: both hands raised high with pinkie, index finger and thumb pointed to the ceiling and ring finger and middle finger folded to the palm. I think a good bit of beer may have been involved as well. As we were 6 rows from the rafters, the surge to his feet slightly overbalanced the young man and he would have faced a terrifying fall to his grisly death had not the girlfriend/spouse grabbed his belt as he continued to show his appreciation for Styx ;-) It was fantabulous!!!!!!! We left the BJCC at about 1am and I headed back to the petsitting gig to let the pups out. No partying for me this year, too tired. Maybe next New Years ;-)

Was your New Year’s celebration memorable? Let’s hear it, then!
htw
Posted by Holley T at 2:12 PM

I just stayed home with the wife & kid and drank absinthe and champagne. Not bad, really.

My usual habit is to party over at my friend T's house. She invites a bunch of people over and most everyone stays the night. It's comfortable, fun, and safe...plus, if you have a few too many, the bed is never far off and driving is never an issue :)

The veritable BARRAGE of fireworks they entertain us with is a plus as well :)

Happy New Year to you and your family KP!