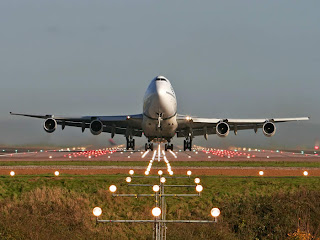 For those not in the know, that's the American Library Association, the national professional organization for librarians. The annual convention is in Washington D.C. this year! I have never been and am terribly excited about seeing all the stuff that, to this point, I've only seen on tv. Will it look the same I wonder? I sure hope not. My flight leaves at 8am Friday morning, my mom is seeing me off at the airport to I don't have to pay 80 million dollars to get it out of airport hock when I get back, and I am trying to map out my packing strategy. I'm a really bad packer...I start off with a plan, panic and throw everything in the poor suitcase resulting in zipping difficulties. I'm hoping that turning 30 will have some affect on the situation but I won't be holding my breath.

I get motion sick so I can't read a book or magazine on the airplane (damn it!) but I did check out some PlayAWAYs to take with me so I can listen to one...The Worst Case Scenario Survival Handbook (I've read some of the monographic version. It's entertaining) and The Canterbury Tales (...because I'm an unabashed nerd. Live with it.). I thought about loading up my Mp3 player and taking it instead...I'm having a hard time deciding between the two of them. Usually I just wait till the last minute and make an impulsive decision. I'll probably go with that plan this time too.

I was going to get some major shopping done today by getting all the travel size stuff I like to take, a new pair of shoes to complement the inordinate amount of walking I'll be doing, a little of this and a little of that. Instead, all I managed to accomplish was the pre-travel pedi and mani. It was a truly inspiring morning despite my lack of initiative and I'm now sporting a color of blue on my toes that would make an overpriced sport bike proud...think The Fast and The Furious: Tokyo Drift blue. The name of the color (and I may just have to go back and buy it) is Blue My Mind ;D How cute is that?

Anyway, this is a long way to travel virtually just to hear about my toenail polish, but I can't go to a national conference with UGLY or BORING toes! The very idea! I've made it my personal mission in life to rail against the negative image that continues to plague my profession. Alright, I do admit to wearing my hair in a bun, but only because it's too hot to leave it down, and it is a messy, unneat bun! And I do suppose that my fav sneakers COULD be construed as "sensible" but I'm ready and willing when one of the major shoe manufacturers wants to make librarians their own brand of sneaker. Hey, if it's good enough for Michael Jordan, it's good enough for us! What would we market them as though? Air Librarians? Reebooks? Saucarnegies? Libroks? I'll have to give this some serious thought.

I will be taking my laptop to ALA (can you believe the hotel we're staying at charges $10 a day for wi-fi?) so if you can stand it, you'll get to read about all the great events I'm going to in D.C. If you can't stand it, piss off as usual! ;D

Packing is a bitch and I always wait to the last minute and wind up forgetting something... Good Luck. 10 bucks a day are you freaking kidding me can we say try to find a starbucks or something.

The washington conference center is supposed to be offering free wi-fi in the conference areas so I'll just have to find a corner from which to bore everyone
;D

BSkove-do you go to ALA or any other library related conferences on behalf of your company? I thought maybe you might since many of the heavy hitters in the publishing world are there. If you are going, have a great time! I plan to :D

Just wanted to stop in and thank you for the wonderful post over on the YA Cafe! I just saw it today (I'm so slow sometimes) and am so glad you enjoyed Such a Pretty Girl.

I'll be wandering around down at ALA on Saturday with authors Melissa Wyatt and Mary Pearson in the morning, but I have no idea where we'll be. Still, I'll be checking name tags for Holley spelled with an 'e.' Have a great time! Best, Laura Wiess

How exciting! I hope I bump into while I'm there, that would be great! Thanks for the comment
;D