We kicked @$$ at the Alexander McCall Smith event today! He was a great guest and speaker, though he had a disturbingly soft handshake...that may be a Scottish thing??? He was decked out in full kilt with the socks and everything. He stayed alot longer than we'd planned and was SO nice! The last author we had, John Berendt (Midnight in the Garden of Good and Evil, The City of Falling Angels) was a little...standoffish...and that really doesn't go over very well with us. Maybe he was just having an off day but, as my mother says, you never get a second chance to make a fir 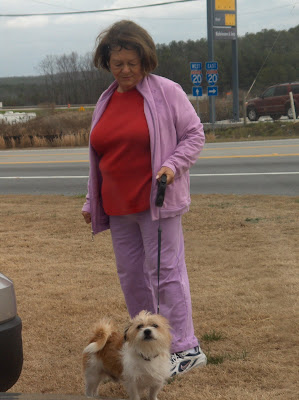 st impression.
This is my esteemed mother! Her motto: I am your mother and I am a mutha'. You may think I'm kidding. I'm not. She's such a cutie :) When I talk to her on the phone I call her my little mamacita 'cause she's so short. Hopefully that's not something dirty or offensive in Spanish. The little s**t at her feet is Buggerbear a.k.a. Booboo a.k.a. bain of my existence, but he makes her life a joy and keeps her happy so I'll tolerate the little stain. He even knows when I'm on the phone with her because he'll start whining and barking (make that yipping) not five minutes after we start our conversation. He's bitten me on the leg, ankle, foot, toes, hand and nose but that was before I put the fear of God in him with a rolled up newspaper. He such a little stinker, but I don't have to live with him so that's okay. He's really cute from a distance. Look at his face in this picture. Do you see the sneer? I do. 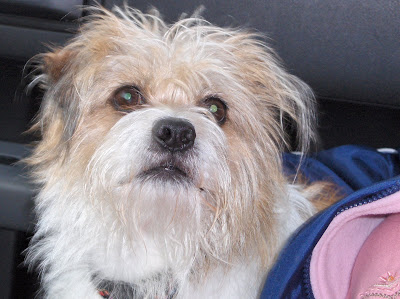 I certainly don't deny that he's cute. I take too many pictures of him to say otherwise. All I'm saying is that we don't get along and never will. He doesn't blink an eye at my arguements that she was my mother before she was his. I wish I had that kind of confidence. :)
Adios!
htw

. The last author we had, John Berendt, was a little...standoffish...and that really doesn't go over very well with us.

Fair enough. But it is tough on authors doing that kind of thing. Lots of them are temperamentally suited to curling up in a room alone with a word processor and their own thoughts, and it's their thoughts are what we love them for. But they're expected by their publishers to go out, sign books, meet their readers and try to act as if they like it. He probably knows he made a bad impression on you and is kicking himself for it but just can't do better.

He did seem a little shy, but he was following Khaled Hosseini, who was a magnificent speaker, and was followed up by Dean King, another great speaker, and this author. It was the comparison that made the difference rather than the experience itself. You've made a great point about temperamental comfort because I, while not an author, do hate crowds. I was uncomfortable in the one we had Sunday and no one was looking at me (unless they wanted tea) so I'll try to be more understanding. It is often difficult to see things from someone else's perspective so I appreciate you calling me out on this. I do hope Mr. Berendt has an easier time with future book tours.

Thanks for the visit pluto!
htw