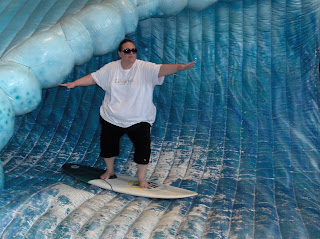 *gasp* Is that a shark in the wave behind me?! I should have run this by Jake first so he could photoshop one in :) Next year's conference is in Anaheim so they had this artificial wave set up as a free photo op. Katie and I took advantage of it but I didn't see too many others having such fun. Getting on the surfboard was the hardest part. The wave itself is made like a bouncy moonwalk that kids play in, the surfboard was velcro-ed to two metal posts in the middle. It was tough and EXTREMELY ungraceful, but I got up there. Luckily, Katie went first and that's how we discovered the velcro. She didn't notice until she stepped on the end of the board getting down and it flew up and very nearly whacked her in the back of the head. While she didn't face-plant into the trough of the wave, it was a hasty dismount complete with a few squeals. My only regret is that I didn't have my camera ready.... 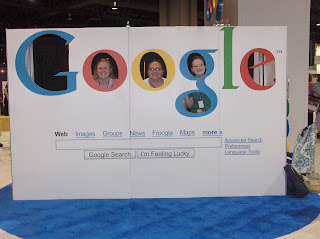 Katie, me, and Erica goofing off at the Google booth on the exhibit floor. I purposefully visited the booth that day because I was wearing my "Librarian: The Original Search Engine" shirt where "librarian" is written copying the Google font colors. The reps working the booth were delighted, or they acted like they were anyway :) 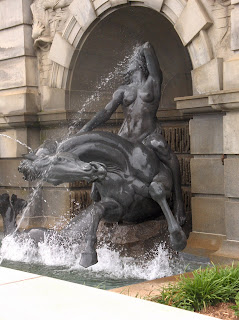 The Library of Congress was created by (what else?) an act of Congress in 1800. It was housed in the Capitol until 1814 when British troops (the buggers!) burned the building to the ground. This was the point at which President Thomas Jefferson, then retired, offered his personal library to help rebuild our country's national library. Congress accepted his offer in 1815, gave him $23,950 for his 6,487 books, and laid the foundation for a national library. The new Library of Congress officially opened its doors November 1, 1897.
That being said, I thought this was a pretty racy fountain to have out front of the national library of the United States of America, right across the street from the Capitol. The men sculptures were covered at the waist, but not this lass...hmmmm....tell the truth, this looks like an Herbal Essence commercial etched in stone doesn't it?
:)
htw
Posted by Holley T at 9:05 AM

bwahahahahhaaaa - herbal essences commercial, that's hilarious!
i need to post my d.c. pics, too. i keep getting distracted!
by the way, i love your lunar calendar!
k

Love the pics. I want to catch some waves:)