some fav sites from D.C. 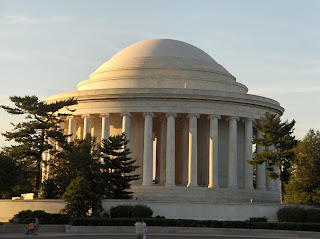 I was pretty proud of this slightly off center photo of the Jefferson Monument (Memorial?)! I still haven't quite got the hang of my digital camera and all its bells and whistles. I really need to take a digital photography class so I can take better photos. 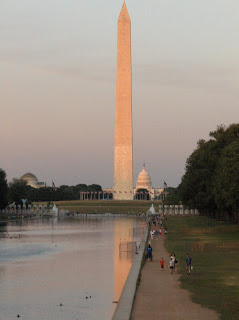 I took about 10 pictures of the Washington Monument and the National Mall. This was my favorite view since it also had the Capitol building in the photo. I hated the inside of the Capitol building because I hate crowds and detest standing in line for 3 hours just to get patted down by a disinterested security guard, but the outside is grand! 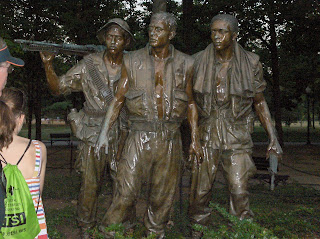 Another of my favorites, the Vietnam Memorial. This was the statue dedicated to the men. The women's statue is further down. I especially enjoyed my visit here until the group of teenagers arrived and spoiled the view by posing in inappropriate (relative to the subject matter) ways with the statues. Nothing too off-the-wall or that I hadn't seen (and probably did in my own adolescence) but disrespectful of the tone of the place I thought. 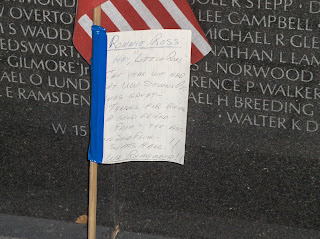 There is a shallow gutter just at the bottom of the Wall and people leave flowers, notes (as pictured above), and other mementos in honor of those listed. I felt a little voyeuristic intruding on someone's private note but I took the photo anyway. Perhaps that makes me no better than the teens I mentioned earlier posing with the statues, but it was a powerful reminder of how this war (or whatever the politically correct term is these days) impacted the country and its citizens and continues to impact them today. There were Vietnam vets interspersed in the crowd, finding names and getting photographs, many with tears their eyes and some acting as docents to the monument. It was powerful to see in person what I've only experienced through books, television, and the internet. 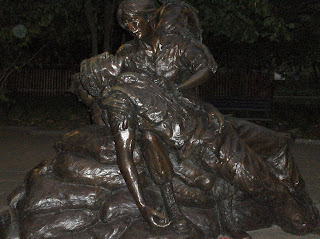 What a moving image! There was more to the statue than this, but it was getting dark and this was the only one of the photos that turned out. My grandmother was a nurse all her life and my aunt still is. I guess Granny was too old and Aunt C was too young to have taken part, or it didn't happen for any number of reasons. I'm glad about that in some way. Everything I've read and seen about the conflict over there is so horrific. 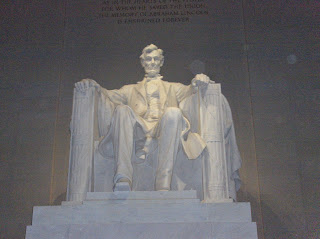 Have I mentioned before that I love Abraham Lincoln? I often wonder to myself how things might have been different had John Wilkes Booth not reached his target. I've seen this monument all my life on the back of the penny, but that statue is 19 feet tall in real life, the grandeur impossible to convey by words alone. The interior walls of the monument are decorated with quotes from his most memorable speeches and they are carved into the walls. I took too many pictures that looked the same and couldn't make myself delete some of them so the best I could do was put just one here :)
p.s. I told E that if I'd been of his time, I would have given Mary Todd a run for her money. I mean, really....tall, dark, handsome, ambitious, idealistic, decent moral character (if history is to be believed)...what's not to like? 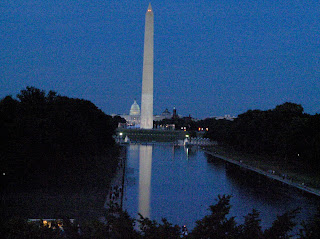 ooooooooooo
aaaaahhhhhhh
this was one proud photographer, let me tell you 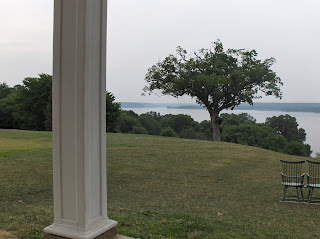 How would you like this view from your back porch? This is the view George Washington enjoyed from the porch of his and Martha's home, Mt. Vernon. This provides only a small view of what you could see. Our tour guide (SHE ROCKED!!!) said that at some point, a law was passed (sorry, I can't remember the concrete details about this) that prohibited the development of any land that can be seen from this porch! Any little sliver at all. That encompasses about 4000 acres according to the informative lady! I could have sat there for the rest of the day and most of the next :)
Those were the REALLY great things I saw in D.C. I especially enjoyed Mt. Vernon and the history of it. It was chilling (in a good way) to be inside the house where he once walked, the dining room where he and Martha entertained guests who would go on to officially create this country. Wow!
htw