Surely everyone is acquainted with my obsession for Guillermo del Toro's El Laberinto del fauno (Pan's Labyrinth) as evidenced by past postings...? Well, I checked out some DVDs to watch while I'm petsitting and found, on our little library shelf, El Espinazo del diablo (The Devil's Backbone)! I was thoroughly creeped out by this older del Toro flick, to the point that I had to turn some lights on, watch a Pixar movie, and stare with dread into the dark when I finally went to bed. It wasn't even that scary towards the end, pretty bloody though. I guess it's just those glimpses of the dead boy out of the corner of the eye and moving purposefully underneath the water that were extraordinarily creepy. The dead boy was not the bad guy, but it was iffy there for a while.
Like El Laberinto, El Espinazo was subtitled but I did not find it very distracting to read and watch at the same time. The head mistress of the orphanage markets herself as a cold-hearted bitch to the young boys she has to ride herd on, but she's a softie and her heart aches because they are so isolated and the boys never have enough to eat. Her companion, Carsares, loves her but suffers that love to be unrequited as he suffers from.....um.....ED? if you catch me? Carsares seems to be a physician of some kind and acts as doctor for the orphanage, but he keeps a collection of preserved fetuses suffering from deformities (apparently maintained in a potent mixture of spices and rum of which he occasionally takes a drink and also sells for its restorative properties.....bleck!). The collecting is definitely creepy! I haven't quite figured out how that figures into the story other than providing the title, but I'll get it sooner or later.
In a fit of del Toro-inspired frenzy, I 1-clicked all his movies I could find off of Amazon...ah, how easily a hundred bucks flows out over the net when you 1-Click....it should be illegal but then I would be sad :(
Ah well, you can't take it with you :) Off to the pups, Tucker and Cole are ready to go out I'm sure. 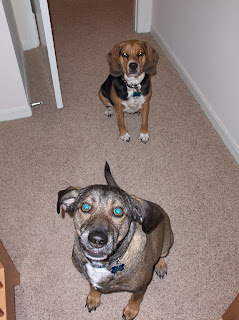 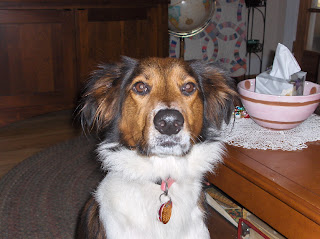 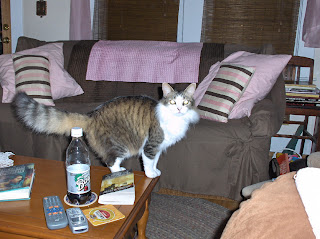 This is Dixie (or, as I like to call her, Dixie Pixie) and Belle (she looks almost exactly like a cat I used to have named Loki). I just finished babysitting them yesterday and started with Tucker and Cole yesterday evening.

Yeah, the Devil's Backbone was good! Not a feel-good movie...

But, those are definitely feel-good photos!

I can hardly wait for it to get here so I can watch it again! I'm really hoping it will arrive while I'm at the beach so I won't have to be on pins and needles waiting when I get back...and you're right, it isn't a feel good movie but I wasn't left feeling utterly depressed either. It was very Lord of the Flies meets What Lies Beneath and Wolf Creek. I was pissed off about Conchita and Jacinto's end was SO FREACKING appropriate!

DB sounds good, I"ll have to add it to my Blockbuster list. Don't reveal any more secrets of the story here! I haven't watched a good creepy movie in a while, am looking forward to it.