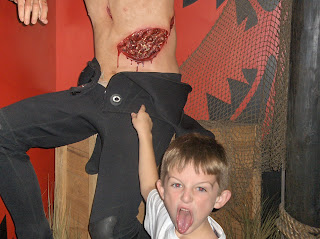 I had my picture taken investigating the wound on this fake person and Conner wanted a picture too...unfortunately he was a little too grossed out to actually touch it (I did point out that it was a plastic mannequin but he wasn't buying it). 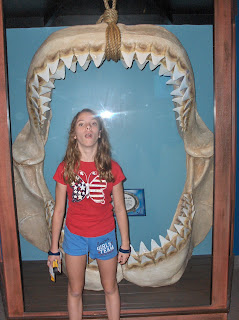 Me: "Show me horror! Show me afraid! Be suitably terrorized!"
Shelby: see photo above 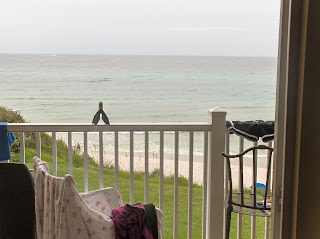 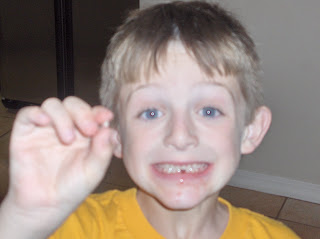 Losing the first tooth! This picture didn't turn out as well as I thought it would since he had several bloody tracts heading down his chin that haven't shown up here...but he's a cute little feller idn't he?
night ya'll!
htw
Posted by Holley T at 10:12 PM

Sweet Pictures and feel free to take stuff anytime (as long as you ask) :)

Okay, just FEW comments:
A. The view from your condo is SICK I tell you! I am tres jealous!
B. Connor is too cute with that gross out photo!
C. ThAt is Shelby's terror face?????
D. How old is C? Just wondering when E might lose that first tooth!
F. Mentioned to Sue at Dept Head that you had expressed interest in an evening book group - she dug the idea.
Have fun!
K

Conner is 6 so E's coming up on it pretty quick! Keep your camera ready at all times!