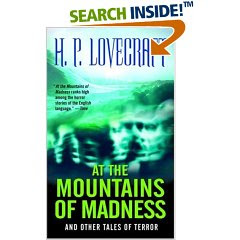 oh, it's on! My fav director, Guillermo Del Toro, has a big project in the works(via Cinematical)....H.P. Lovecraft's At the Mountians of Madness! He's supposed to start work on it after Hellboy 2 consequently bumping another project, 3993, out of the way in favor of the Lovecraft flick.

For those not up in the world of Lovecraft, Madness is a novella about an Antarctic expedition made by scholars from Miskatonic University. They discover strange, ancient life forms that are unknown to their science. They are further puzzled by how highly evolved the forms are, although they seem to pre-date humanity. Named "Elder Things," they're actually aliens and you know, alien stories rarely, if ever, go well.