I will preface this with 2 statements: 1) I'll get pics up as soon as I can but I left my camera dock at home and I won't be finished petsitting until Friday and 2) I typed this up Sunday evening and saved it on my jumpdrive so if there are odd chronological sequences or anything else weird, chalk it up to that please as I am utterly blameless :-)

There was no Joan/Melissa Rivers to cover the Birmingham Museum of Art Junior Patron Pompeii Preview Gala so I guess it’ll just have to be me! I visited a local hair salon to let someone else do the honors for my hair and it was horrendous! I had so much hairspray in my hair that it looked like a dark haystack on my head and that's so far removed from my normal, healthy, glossy hair that I couldn't stand it. I ended up pulling a good portion of it back in a sparkly hair clip and letting it go at that. Everyone else's hair was shiny and sleek, some wavy, some straight but NO ONE with the brittle crap I had on my head! At least the hair clip was pretty. The Gala started at 7pm so I called for a taxi right at 7 so I would not be quite the first person there. Despite my machinations (and my cab driver's utter unfamiliarity with the city in which he works) I was still one of about only 8 or 10 people. The band, City Heat from Atlanta, GA, was great! One of the best bands I’ve ever heard. They played blues and R&B from the 60’s and 70’s and they played it well :-D

Marinated olives; herbed goat cheese; roasted pepper hummus; olive tapenade; julienne zucchini, squash, and carrots; little sandwiches with contents that I have no clue about (tasty though!); tomatoes and capers on toast points; yummy, perfect fruit and a variety of little mini-pastries like éclairs and cannolies. There was an open bar with wine and beer (neither of which I enjoy in particular) but there was a martini table with Lemoncella martinis. At $8 a pop, I was forced to be fairly conservative. I probably would have had an even better time if I’d hit the free booze table a time or two (or three or four?).

I had a good time, but it was kinda lonely. I didn’t see anyone else there by themselves and I had no one to talk to. I did end up sort of sharing a table with a nice couple, both of whom were pretty friendly. They in turn had some friends turn up. One girl was in a wheelchair because she had dropped a large piece of metal on her foot THAT MORNING! A certain amount of severing had taken place *cringe*. But she slung on a cocktail dress and got a friend to bring her. You’ve got to admire that!

I got a second Lemoncella to enjoy with my fruit and pastries then sat back to enjoy the music. Out of the blue, the Lemoncella lady came over and refilled my glass, saying that she’d made too much, “I’ll just top you off.” Of course, I accepted gracefully. The couple and their friends said, “Wow, how did that happen?” I replied, “I don’t know exactly but that’s an $8 martini so I’m takin’ it!” We shared a good laugh. Later, Lemoncella lady brought me another complimentary yummy martini and I began to wonder what her motivation was. I later saw her giving other people in the crowd free cocktails so I wasn’t so uncomfortable with it.

On the people watching front, one of the catering staff was apparently practicing for her spot on America’s Next Top Model, as that was the last place I saw a strut like that. However, when you are up into plus size clothing and are sporting an apron and rubber gloves, something gets lost in translation. Later in the evening she came down the hall in front of the museum store with a full tray of empties. Like Hansel and Gretel, she was plopping empties in the floor with every other step. A trail of shattered beer bottles and yeasty beer followed in her wake but she just kept walking. I got beer splashed on my legs and was just praying that a shard of glass wouldn’t get into my cha-cha strappy sandals! There were plenty of tables where she could have set the tray down and lightened the load but she just kept walking with this little smirk on her face like broken beer bottles littered the floors of museums the world over. The other great people-watching opportunity came in the form of the Scotsman. He was decked out in full kilt garb, even the socks! Dark hair, crew cut, full beard….HOT! He sat across the room so I never got the opportunity to get close and see if the voice matched the outfit.

Overall, the Pompeii exhibit was SpEcTaCuLaR! The body casts were sobering and poignant, but did have as much impact as I had imagined they would. There were a few exceptions. Two figures, which archaeologists pegged as a woman and possibly a teenage daughter, were found together lying on their sides. The smaller figure’s head was cradled on the larger figure’s side and the larger figure seemed to be offering some shelter. 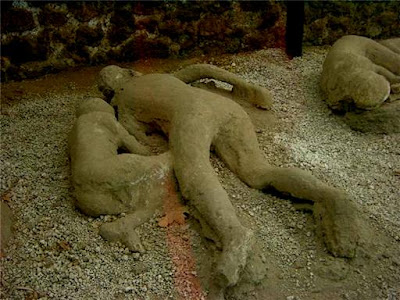 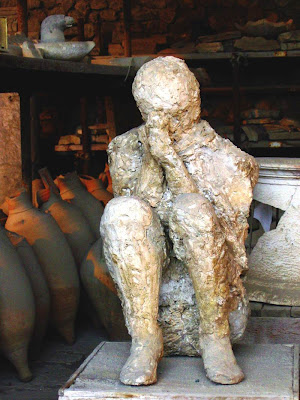 The worst one and this holds true for what I’ve seen in books as well as (now) in person, is the famous dog. The human body casts are sad and it’s possible to see the distress and panic in their positions and expressions (for the one’s that you can discern) as they ran, were suffocated or were killed by falling debris but the dog is the only body cast featured in the exhibition where you can see the total agony. The dog was chained with a collar, unable to escape and obviously terrified and in pain. The cast is so exact you can see the little pup’s splayed toes. 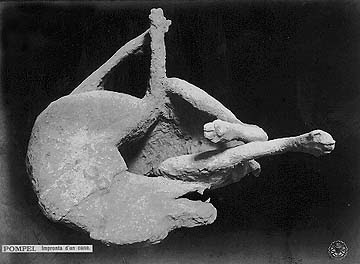 My only complaint about the exhibit (and I don’t know how much of that could be/could have been affected by the museum) is the bareness of the body cast displays. I imagine it was done to highlight them so that nothing could compete while you were viewing them but it ended up being to sparse for me. Maybe a large photo showing the cast in situ where it was found and made? Something to give these images some context. To see them simply sitting by themselves on a well painted surface in a dramatic maroon color took away from the mystique for me. It made it look like sloppy sculpture instead of the human remains they really were. I guess what I’m trying to say is that I would have liked to see them with something connecting them to the site where they were found, to lend even more meaning.

I still maintain that this is wonderful exhibit. The jewels these people had, the gold necklaces with emeralds and gold armbands, were finely wrought and achingly delicate. Most of the rings don’t look big enough to fit my toes, much less on someone’s finger. The sculpture is amazing but I’ve always found marble sculpture to be that way. The really fine ones look as if a light breeze will rustle the fabric of the subjects clothing. Even though I know it is made of stone I always feel like it would be soft if I could touch it. The frescos in the exhibition made me want to seriously have some in my home. It is such a dramatic, exotic effect. I have to ask myself if how long I could stand something so permanent and hard to change. I wish I had some friends who painted….

The end of the evening found me outside the museum talking to the guard while I waited for my errant cab driver (why did I call him again?). The promised 15 minutes turned into 20 and then I got a call from him saying he was in the parking lot. Weeelllllll, I was in the parking lot and he most assuredly was not there with me. In my unfailing and obviously misplaced faith, I thought perhaps he just hadn't wanted to come through the gate and was at the end of the parking lot so I walked down there. It's dark and 10:30 at night, alone, female, wearing a sparkly dress.......none of these are good in the area around the museum. A few of the other partygoers leaving at the same time offered their assistance but I, firmly believing my cab was idling just around the corner, thanked them for their assistance and walked on. OF COURSE he was not there. So I call him back and say, "I'm sorry but I just don't see you." This man, who I saw not 2.5 hours ago (and Birmingham, Alabama is not a hotbed of taxi activity), said to me, "You are at the School of Fine Arts, aren't you?" *making a scale with my hands*Birmingham Museum of Art.....Alabama School of Fine Arts......other than the art part, they don't seem that similar to me. Anyway, he sped around the block to me and we set off for Mountain Brook again. I had to lead him out and I had to lead him in. He complained yet again about the lack of street lights in Mountain Brook. Mrs. VH has a dip at the end of her driveway that you have to take at an angle or risk losing the car's exhaust system and I took great pleasure in hearing him try to scrape off the muffler of his cab as he left.
I got the dog walked (in my sparkly dress and purple crocs), the makeup scrubbed off and the hairspray out of my hair and went to bed.
The End.
Posted by Holley T at 11:23 AM