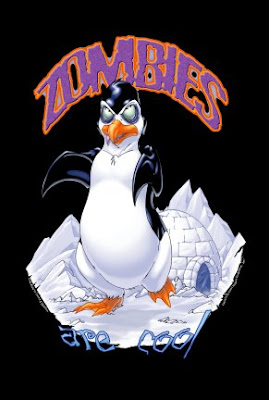 Rob Zombie is too!

This is a t-shirt I bought from the website of one of my fav authors, Laurell K. Hamilton! You'd have to read the books to understand the penguin reference, there's no way I could explain the complexity of Sigmund here on my blog....check out Laurell's website, better yet her books, and you'll get plenty of penguins in the bargain.

Okay, back to work. So I checked out the original Halloween from the library and watched it Wed night. I could never watch it when I was a kid....just too damn scary.....and I really felt it would give me a point of reference for the new Zombie adaptation. So, I was by myself at home, all the lights on in case I got scared aaaaand....we're off.

OMG, the soundtrack alone had me cracking up in five minutes, there were naked boobies everywhere, and I saw better acting in Army of Darkness! Michael was great, even there, but everyone else just sucked. Whenever he stabbed, only an inch or two of the butcher knife seemed to be making any progress. Not that I'm just dying to see a good stabbing, but special effects have really come a long way since then let me tell ya!

I watched Halloween in its entirety, alone, then went to bed. No nightmares, no gasping awake at a strange noise....nada! Yay for being a grownup!

In this version, Michael is HUGE! Tyler Mane, the guy who played Sabretooth in the X-Men movies, just looms over everyone. In the original, Michael lumbered just a little and had some trouble getting through those closet doors....no such luck for victims here. He's punching down doors and windows like an F5.

Okay, so you know Michael stabs anything he can get his knife to, but RZ put in a seriously dysfunctional family to explain his psychopathic behavior. It worked, but the suddeness of the boy's murdering in the original kinda seemed a little creepier. There was no reason for him to just all of the sudden start whacking away at people. In this version, there's an alcoholic, abusive step father, the mother is a stripper, and the daughter just seems like your average American teen to me....oh, RZ threw in a little infant sibling just for S's & G's. There's lots of yelling and cursing of a severe variety, some Columbine-esque hazing from school mates (one of whom Micheal beats to death with a tree branch).

I must say here that the blood effects throughout were genius. I've never seen blood look so real. Except for one gaping misedit at the end where someone dies in a very bloody way, facially speaking. Cut to the next scene where he's being dragged into the house and voila! no blood, and his eyeballs came back too. Nobody's perfect I guess?

The main difference between this movie and the original is we get the spiffy new dysfunctional family and a good glimpse of Michael's life in the asylum. No sheet-clad figure carjacking the huge Griswold Family Truckster, no sirree. Lots of blood, lots of bodies, and a very Terminator-like stealing of a trucker's clothes. And try to say you didn't laugh during the bathroom scene even though you knew he was going to get his head bashed in!

Jamie Lee Curtis' part now belongs to the long lost infant sister and the teenage girls are just as vapid and the naked boobies are still there. One other point we noticed was that there was one (1) cell phone in this movie, everyone else was on a corded landline. RZ kept you on your toes as to what decade this movie was truly in.

One funny thing I have to point out...in the original movie, JL Curtis' blond friend sneaks off to make out with her boyfriend, equally blond but wearing these ginormous square Elton John glasses and RZ let the same character in this movie keep them....touche :)

The ending was changed, thank goodness, and Laurie got to do the killing instead of Dr. Loomis. RZ had this great effect where her screams were riding the wail of police sirens like a surfer catching waves.

My tip of the week? When you're straddling your first mass murderer and the .357 clicks on an empty chamber...go ahead and pull the trigger 5 more times just to make sure. Does anyone else out there count the gun shots when you know someone's got a gun with a cylinder instead of a clip?

Okay, that was really a ramble of nonsense, but I did try to take better notes this time to remind myself of what I wanted to say.