The chain of information started at CNN, but I found it on Bookshelves of Doom.

How'd you like to help your boyfriend out with some research on his book in progress? Sounds pretty neat, huh? Would you change your mind if it was titled "Canabalistic Instincts"?

An aspiring horror novelist was arrested after police discovered his girlfriend's torso in his closet, a leg in the refrigerator and bones in a cereal box, the city prosecutor's spokesman said Thursday.

Nearby they found the draft of a novel titled "Cannibalistic Instincts," said the official, who spoke on customary condition of anonymity.

Jose Luis Calva told police he had boiled some of his girlfriend's flesh but that he hadn't eaten it, the spokesman said. (Isn't that real considerate of him?)

The prosecutor's office said Calva tried to escape when officers entered his apartment, but was struck by a car and hasn't recovered enough to give a formal statement to police. 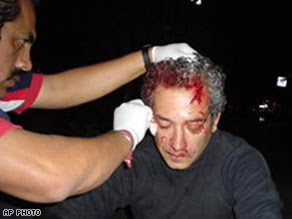 How creepy is that?? Yikes.